Memo on Alternate Modes Study Shows How Little has been Done

One of the blizzard of documents the City and SRC project team posted to the City's UGB Hearing website is interesting for a couple of reasons.

First off, the "Salem River Crossing Alternate Modes Study Implementation Overview" is addressed to the "Salem River Crossing Project File." It didn't go to City Council or SKATS or any other public body. It was never posted to the SRC's own website as part of the Oversight Team's materials. Instead it was private and internal, and it points to the existence of a trove of non-public memos and analyses. It would be interesting to see what else has not been made public. 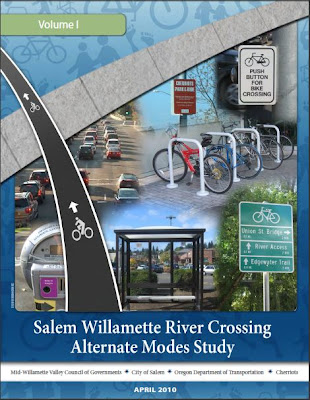 Second, the memo is disproportionately lengthy relative to the actual scope of accomplishments. It says "The purpose of this memo is to document actions identified in this study [the Salem River Crossing Alternate Modes Study] that have occurred or otherwise advanced towards implementation in the last five years."

This will be tedious, but we'll go through all of the "actions" and assess them. The pattern that emerges is a consistent ratcheting up of small things in an attempt to make them seem like big things. There is a scattershot pattern of fragmentary actions. Individually they are real things, but together they remain too small, too disconnected, and too partial to make for effective change. They are window dressing more than substance. Until they participate in fully connected networks, they remain weak measures, sometimes more for show than substance.

Finally some paragraphs repeat material and might give the impression of more action than is warranted.

(Throughout, memo language will be in italics and mostly indented. Commentary will be in roman type and non-intended. Hopefully this will be clear. For convenience we'll also abbreviate as the "Alt Modes Study" from time to time.) 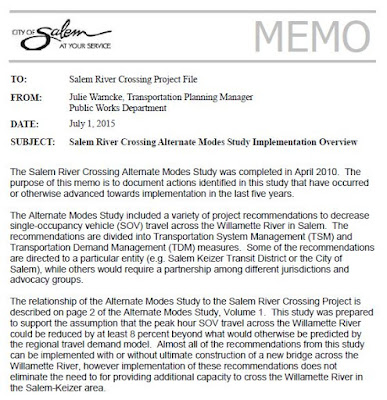 In way this is the perfect thing to lead with in the memo. Striping a few sharrows around town in disconnected segments is not sufficient to do very much, and the City has not extended a network of sharrows in new places. Moreover, the sharrows on Commercial and on Chemeketa aren't actually on low-traffic streets and represent something of an "off-label" use for sharrows. Finally, the limitations of sharrows have become apparent, and they are recommended less and less. In the photo from the paper, you can see a "bike salmon" on Chemeketa Street at Winter: He is biking against traffic, and hugging the curb. For him, the sharrow is not at all useful. You may say that this is a compliance issue, as the man is in fact bicycling illegally, but it is also true that this is not isolated, and many people find too much traffic, too high speeds, and too many parked cars of Chemeketa for their comfort, and do not feel confident biking down the middle of the chevrons.
The memo talks about "enhancing" existing facilities. There is nothing enhanced about a basic bike lane on arterial and collector streets. In most cases, these are baseline and part of standard street design. High and Church Streets also run north-south and do not directly contribute to making the east-west connection across the Willamette River. From High or Church Street for many it remains a perilous and unrealistic trip to reach the Union Street Railroad Bridge for a crossing of the River.

Also, see below for the list of Streets in the Alternate Modes Study itself. This bullet doesn't correspond at all to what the Alt Modes study actually recommends. It is therefore largely padding.
This is mostly true! Except that it really should be singular, not plural. (See below for full list of streets recommended in the Alt Modes Study.) We are working on a plan one bike boulevard only. Union Street maybe counts as a half of an additional one, as there is a mostly funded plan only to Winter Street at this moment. The Maple-Winter Street alignment in progress, it must be said, does not figure in the Alt Modes Study as part of its recommendations. It is an important route, that much is true, but it's not actually one of the Alt Modes recommendations to implement.
This is also mostly true, but its interpretation is very much in the half-full mode: The interchange of Wallace & Glen Creek was hugified, not just "widened." Sure there is green paint, but the design isn't one you'd send many kids to the park on. It is not family friendly or comfortable for casual cyclists.

The signage is useful - but only if you are already comfortable on these roads. It might assist on wayfinding for the first trip, but if the roads are not comfortable, a person will not make a second trip and will bail out of the project to make more bike trips on the route.

The path between Glen Creek and the Union Street Railroad Bridge is nice and all, but it's a shortcut only, not a key connection. Mostly we resist calling bike facilities "amenities," but this one fits: It's a non-essential enhancement, not a fix to an important gap.

The final two paragraphs on the Second Street/Wallace undercrossing concept and the Union Street bikeway are padding. The undercrossing remains conceptual and is still being studied. Currently as part of a $30million+ concept with Marine Drive, it is quite a ways off. The Union Street bikeway graph is totally superfluous and duplicates material above on the "bike boulevard" bullet and below on the "safe crossings" bullet.
"This project does not directly address peak hour trips between west Salem and downtown." It also trades on a narrative of increasing skill that evidence does not necessarily support. We do not in fact see a great translation from riding in parks to riding downtown on city streets. It's not like large numbers of people bike around the park and then feel embolded to contend with city traffic after they pick skills. This also accepts the idea that bicycling should be a specialized skill that only confident people should employ. It makes vehicular cycling normative and says to people who want to bike "you will adapt!"
Yeah, but again, without comfortable streets by which to reach these bike racks and repair stations, they are underutilized. It's a bit of a Potemkin display to "make it easier for people to choose to bike downtown" until we have comfortable streets for people. The Alt Modes Study also specifically calls out bike corrals for downtown, not merely a few more racks to downtown sidewalks.
The signal for Union at Commercial will be a major accomplishment, but this is the third time the Union Street bikeway appears in the memo. The Second Street/Wallace undercrossing has already been mentioned. Wallace Road at Glen Creek has already been mentioned. So three of these bullets are padding.  The fourth is new, and is meaningful - but they mostly benefit people on foot (and a few vehicular cyclists who are confident taking the lane downtown) and don't do much to"address peak hour trips between west Salem and downtown."
We already discussed signage under the Union Street Railroad Bridge.  This is largely padding.
"There has not been progress on either Glen Creek or Orchard Heights Roads." Since those are the main sites recommended in the Alt Modes Study, his seems rather partial, and again gaps in a network tend to render the whole network minimally useful. People give up at gaps.

So how'd we do? The memo has nothing at all on:
Maintenance and trip-end facilities are important! And the West Salem Bike Routes would be a great help. There are some real omissions here.

That's the first third of the study, on Bicycle and Pedestrian Recommendations.

There is a section on Transit, but others who follow transit more closely will be able to assess it better. We omit it here. A second post will discuss TSM/TDM recommendations.

Already, though, in the Bike/Ped section, it has not been implemented very quickly or deeply. I rate most of the progress as on marginal (and generally easy) things rather than on core and more structural recommendations, which are more difficult, more costly, and will in some cases require a stand against our autoism. Some locations for bike lanes may require less curbside car parking, for example.

Assessing the Alt Modes Study accurately is important because the SRC keeps saying over and over "the traffic modeling performed for the Salem River Crossing Project assumed that more aggressive transit and TSM/TDM programs would be implemented." (From the Land Use Addenda.) What has happened though is the speech and intent keeps getting substituted for action, and we act as if what we say we will do we have in fact already done.

The Alternate Modes Study recommendations for bike/ped has in no way been implemented "aggressively" and we should want to see this done before we move forward with anything for the Bridge.
Posted by Salem Breakfast on Bikes at 5:00 PM