The Blizzard and the Shifting Sands: City Fails on Statewide Planning Goal 1

Between the massiveness of the document dump and the compressed time lines, the SRC team has failed to observe Statewide Planning Goal 1 on "Citizen Involvement."

The Schedule was Orchestrated


Due to public and agency involvement requirements, a joint jurisdiction/agency/Interested Party public hearing will likely be scheduled in mid-October. The purpose of involving multiple participants is to ensure that all parties receive the same information along with everyone hearing public testimony at the same time. Confusion is likely to be less if all parties are provided with the same material, information, testimony at the same time.

And from the August 23rd Cherriots work session:


Director Lincoln asked how the Board can review the Technical Reports. Ms. Warncke said the reports will be available seven days before the public hearing on the City’s website for land use records.

The schedule was compressed on purpose and information was withheld from other Public Agencies in addition to the general public.

The Document Dump was a Blizzard

Part of the plan was clearly to overwhelm critics and other citizens with an impossibly large burden of reading material.

Here are the total document lists late on Friday the 7th.


That's 93 documents, many of them tens of pages, some of them hundreds of pages long.

Even on Friday, there were Shifting Sands

Throughout the period of Wednesday to Friday, there were an unknown number of additions, deletions, and modifications to the document list.

Many of the documents are historical padding, important as supporting material and context, but not directly relevant to the analysis at hand about the proposed UGB expansion.

But a key is that it is not possible for the citizenry to be able on very short notice to winnow the chaff and isolate the most relevant documents for closer analysis.

Even if you think seven days notice is adequate (and that is not the position here), by the project's own plans, there should have been a stable document list by the end of Wednesday.

The project team failed to do this.

Here are some details of the changing document lists. I didn't get a screen capture of what I think was the first set from late September, so this starts with at least the second iteration on 10/6 - on Thursday, after the seven-day window should have closed.


The citizen involvement program shall be appropriate to the scale of the planning effort. The program shall provide for continuity of citizen participation and of information that enables citizens to identify and comprehend the issues....

We see here a plan for an orchestrated last-minute document dump, a blizzard of documents in that dump, and a continually revised document list even after the seven-day advance window had closed.

Even professionals like staff with DLCD have noted the short time line. "This department has not had adequate time to review and include comments in this initial participation letter" of September 27th. Though it appears they did receive some documents on September 22nd, more than a week before the seven-day window for Cherriots or the ordinary public.

At least in the ordinary sense of the words, a sense that ordinary citizens would recognize as reasonable, the totality of information was not conveyed in "an understandable form," the "general public...[lacked] the opportunity to review...prior to the public hearing process," and the "involvement" on the UGB Hearing has not been "appropriate to the scale of the planning effort."

The blizzard of documents is in no way "understandable" in the time frame "prior to the public hearing process." In the disjunction between the size of the document dump, its shifting nature, and the nearness of the Hearing, it is not at all "appropriate to the scale."

It violates the ordinary sense of all of these.

It might satisfy some legalistic, technical definition of these, but in the spirit of the Statewide Planning Goal it is an EPIC FAIL.

The Hearing is tomorrow, and they're still adding official reports to the document dump (not just citizen comment)!!! 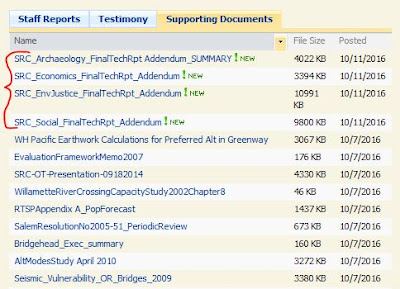 Here are the Archaeology, Economics, Environmental Justice, and Social Resources addenda.
Posted by Salem Breakfast on Bikes at 11:00 AM

Thanks for the kind words - and indeed, Strong Towns is a great resource as Walker says.

Also, the Cherriots packet for the October 10th meeting, about which there will be more to say in a subsequent post, contains confirmation of an initial round of document postings:

"...the City of Salem published the October 12th public hearing notice
on September 22; and on September 29, twelve (12) report addenda and summaries were
posted on the City’s website."

Those twelve documents were subsequently deleted and a new set posted. So that is more evidence of the "shifting sands" problem.

I guess I am a naysayer once again.

My Neighborhood Association would have like to weigh in on this issue, but we met on Oct 6th and dump happened late that day and more on Friday.

But to a great extent this is all a waste of effort if the bridge is going to require a vote of the people. I say this because when discussing the bridge in general terms, the members asked, how will it be paid for. My reply was that there are suggestions that only a small part will come from the federal and state governments. The majority will come from residents of Marion and Polk counties in the form of tolls, license fees, and gas tax with also a possible property tax. This brought a resounding scoff noise from everyone in the room.

The bridge can be debated until the voting begins, but the outcome is going to be the same. Yes, we night want a bridge, but not if we have to pay for it.

One man summed it up quite well when he said, I don't use any of the bridges but maybe once or twice a year. Why should I have to pay for it?

The consensus was fix what we have and stop this foolishness!

And so it goes with us naysayers.

But on another note, as a neighborhood association we were not informed about this issue at all. No one offered to come out and speak to us. I agree that Goal One was not met. I am going to suggest to all my fellow NA chairpersons, that we all send letters of objection to any vote on this matter until all 18 neighborhoods are given an opportunity to have a presentation and decide if they wish to make public comments.

Thanks once again to Breakfast for your excellent work!

Holy smokes! They've added four new relevant addenda to the document dump, and it's the day before the Hearing. Updated with image clip.