Our local Metropolitan Planning Organization meets on Tuesday the 25th. While there are no significant action items on the agenda it seems, the minutes from last month might be worth some notice.

Greenhouse gas target rule update - "Don't tell me what to do!"


It's hard to know what to say about the ideological conflict here. We have climate change denialists fighting a rear-guard action to baffle and blunt any effort for change. 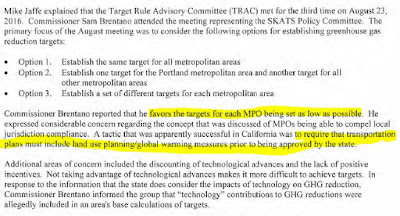 Our MPO right now "favors the [greenhouse gas] targets for each MPO being set as low as possible...[and fears that the State will] require that the transportation plans must include land use planning/global warming measures prior to being approved by the state." [italics added] That regulatory oversight is kinda the point. The libertarian, small-government urge here isn't about finding ways to do things better than burdensome State or Federal regulations might seem to require; it is instead about flouting and avoiding altogether. It's about business as usual and the ease of doing nothing.  It's not freedom-for, it's freedom-from.

But there were a couple of new things in the discussion. One interesting wrinkle is that there appears to be structural mismatch at the MPO itself between the State effort and Federal requirements.

From here, from an outside vantage point, the MPO seems like it is primarily an agency that exists to coordinate across a real geographic entity and to compensate for the fact that this entity doesn't have an independent existence: Our political boundaries for municipalities are fragmented and multiple, and do not enclose with one circumferential border the actual clustering of people in a logical geographic unit. There is in fact a Salem-Keizer thing across multiple jurisdictions, and the MPO recognizes this. So it is reasonable that the State would look to it for regional transportation planning. But it seems that the MPO is crucially a creation of the Federal government, and exists primarily to implement Federal policy, planning, and funding.

That's maybe an internal structural tension that staff will know all about, but which is not generally visible to the public.

There was also a note that some of the statewide Advisory Committee suggested that Regional Transportation System Plans were "duplicative" and did not "add value." I would echo this. There's a lot of effort and text that goes into the RTSP that largely duplicates what is in the Salem TSP and it would be interesting to consider whether there might be a different work product that would add more value than something that mainly operates as a compilation.

At the same time, there have been moments when public details in the RTSP were in front of public details in the Salem TSP or CIP. So one small way that the RTSP has value is as a partially independent source of information and cross-check. Insiders who already know all the stuff might overstate its duplication. It's not, in fact, wholly duplicative.

Maybe it's not that the RTSP should be scrapped, but that there might be ways it could evolve to do less duplication and then generate one or more extensions of new analysis or information.

Back to the Target Rule, though there is a Policy Committee meeting already scheduled for November 29th, there may be another one earlier in November scheduled just for greenhouse gas targets discussion.

There was a brief note on the idea of swapping some Federal funds for State funds on the Union Street @ Commercial light and crossing project. (See previous note here.) And in that discussion there was a hint that the swapped funds might go not to another multi-modal project, but would get sucked up by a thoroughly autoist project, the I-5 interchange at Keubler.

This is consistent with a position expressed by some on the Policy Committee that autoist funding must remain constant, cannot be reallocated, and that multi-modal funding must always be extra and on top of the autoist component:


[One member] expressed frustration related to not having the funding to complete systems that would achieve several goals including GHG reduction.

It seems like one or more fund exchanges could be ways to deallocate money from autoist projects to right-size them and boost funding on walking, biking, and busing. It seems like there could be more creative ways to handle this than to pilfer money for more highway expansion.

The October agenda itself has some interesting things, but not action items or things that seem worth close attention at the moment.
SKATS Policy Committee meets Tuesday the 25th at noon. SKATS is at 100 High St. SE, Suite 200, above Andaluz Kitchen and Table Five 08.
Posted by Salem Breakfast on Bikes at 7:00 AM

RE: "There was also a note that some of the statewide Advisory Committee suggested that Regional Transportation System Plans were "duplicative" and did not "add value."

The RTSP is a State requirement under the TPR.
The RTP (aka MTP or Long-Range Transportation Plan -LRTP in other areas) is the federal requirement.

For historical reasons, SKATS labels the long-range transportation plan the RTSP. It is used to fulfill both Federal and State requirements. Other MPOs in Oregon actually produce two documents, thus the "duplicative" remarks. Especially since the differences between the two requirements are minor.

RE: Fund Exchange - It seems like there could be more creative ways to handle this than to pilfer money for more highway expansion.

Pilfering is not going on, especially under the accepted (from a dictionary) definition of the word.

Can everyone please use more acronyms? Transportation issues at the local and state level aren't quite opaque enough - more acronyms would really help distort any clarity that might otherwise be present.