It's Bike Week at Strong Towns - and a Bike Boulevard Update! 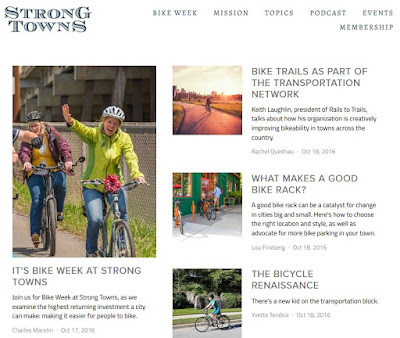 This is pretty great. Strong Towns is devoting the week to bicycling.


As a young engineer, I remember attending a seminar that had a brief section on complete streets and traffic calming. I remember being annoyed. I remember thinking it was a waste of my time. I design streets for cars. Bikes are recreation and they belong on trails....

Join us for Bike Week at Strong Towns, as we examine the highest returning investment a city can make: making it easier for people to bike.

That narrative arc from "bikes belong on trails" to "bicycling is the highest returning investment" is a useful one!

It will also be helpful that some - or perhaps most of it - will be written from the standpoint of people who find bicycling as an incredibly useful and efficient urban mobility tool, but who do not also self-identify as "cyclists." That is, they are ordinary people for whom bicycling is a tool, but not the only tool or the primary tool, in the transportation toolkit. It will be written from the "interested but concerned" perspective more than the "experienced and confident" one.

So far they've got:
Check it out!

The Salem Bike Boulevard Advocates sent out a note with an update and the Advisory Committee for the Winter-Maple project:

DKS is a familiar face on Salem Transportation projects: They did the Commercial-Vista Corridor Project and are doing the OR-22/Mission Street project underway now. But Toole Design has not been active recently here. Alta has done most of that kind of work. (They were involved in Bike and Walk Salem and in the Cherriots RideShare Plan.) The graphic above from Massachusetts is one by the Toole Group, and they have been more visible lately on some national projects. So that will be interesting to see if there is a difference in perspective or anything meaningfully apparent from the outside.

It's great also to see Salem Alliance Church involved. They generate a lot of traffic in the neighborhood, especially on weekends, and it has often seemed like asking people to try out a once a week commute by bike for worship might be easier than asking for a weekday work commute by bike. They also operate Broadway Commons, which stands out as a great moment in Salem's urban redevelopment. The Church's engagement could be something interesting to see develop!

Finally, getting the neighborhoods fully on board will be important as a strong bikeway will call for some auto diversion and calming, and if it turns out to be too difficult to prioritize biking and walking in meaningful ways on the streets, the bikeway will be less successful and less broadly useful. There will need to be trade-offs, and those will be political, not technical, problems.
Posted by Salem Breakfast on Bikes at 12:01 PM