I found the second set of comments from DLCD a little disappointing. I was expecting a longer, more detailed critique, a fisking really. But instead of addressing errors, they mostly keyed in on a set of lacunae. It was structured around a notional remand more than anything else. 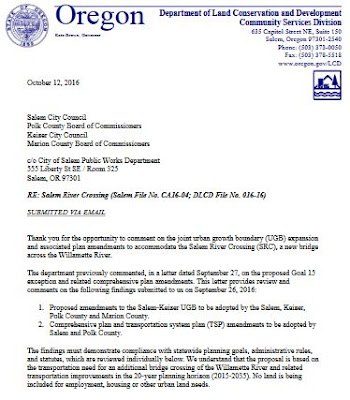 Transportation Need
The findings for transportation need address some of the elements of Oregon Administrative Rules (OAR) 660-012-0030, but the findings are missing some key references.

OAR 660-012-0030(1) requires that the “TSP shall identify transportation needs ... including: (a) State, regional, and local transportation needs.” OAR 660-012-0015(3) requires that local TSPs must be “consistent with regional TSPs and adopted elements of the state TSP.” The findings (Section 3.1.3.1, page 80) note that the Oregon Highway Plan (OHP) does not identify a need for an improved Willamette River crossing in Salem. The findings include projections of future traffic volumes that would exceed the mobility targets adopted in the Policy 1F of the OHP. In response, the findings say that the “The State proposes to adopt Alternative Mobility Targets.” This implies that consistency with the state plan will be achieved by amending the standards within the OHP, rather than by adding a project to the state plans.

The findings in this section do not include OHP Policy 1G, which calls for improving the efficiency of, or adding capacity to, the existing highway system before adding new facilities. The findings include a cross-reference stating that “consistency with statewide transportation plans is provided in Section 4.2.4.” State transportation plans are actually addressed in Section 4.2.5 (page 168). OHP Policy 1G is included in Section 4.2.5.2 (page 172); however, this section does not contain any findings, and points back to “Section 3.X .” With this circular cross-reference, the findings do not address Policy 1G....

OAR 660-012-0030(4) provides, “In MPO areas, calculation of local and regional transportation needs shall also be based upon accomplishment of the requirement in OAR 660-012-0035(4) to reduce reliance on the automobile.” OAR 660-012-0035 requires that “local TSPs shall be designed to achieve adopted standards for increasing transportation choices and reduce reliance on the automobile.” The findings (Section 3.1.3.1, pages 84- 85) describe existing spending on various projects at the MPO level to make the general point that funding is being provided for projects that could increase transportation choices. The findings do not analyze whether the need that has been identified for this project is based on the locally adopted standards.

The findings for OAR 660-012-0035(4) are incomplete, and miss the actual requirement of the rule. The rule requires provides, “local TSPs shall be designed to achieve adopted standards for increasing transportation choices and reduce reliance on the automobile.” The findings (Section 4.1.2.5, page 149) generally address whether the TSP amendment would “increase transportation choices and reduce reliance on the automobile,” but do not specifically address the locally adopted standards that must be used to measure progress. The findings list some general ways in which the proposed amendments might have the effect of increasing transportation choices as a secondary or indirect effect, but do not include any findings that the proposal was “designed” to achieve this outcome.


... local governments shall evaluate progress in meeting benchmarks at each update of the regional transportation plan. Where benchmarks are not met, the relevant TSP shall be amended to include new or additional efforts adequate to meet the requirements of this rule.

Local governments in the region have not evaluated progress in meeting the adopted benchmarks. The findings do not include any analysis as to whether the TSP amendment would be adequate to meet the benchmarks.

The department understands that the draft environmental impact statement included additional alternatives that did not require a UGB amendment. The findings should make reference to these other alternatives and address why the alternatives are unreasonable.....

Conclusion
The draft proposal submitted is missing some important findings, and does not adequately address the required goals and administrative rules as summarized above. The draft also includes numerous incomplete cross-references (e.g. “as described in Section X”) which makes it difficult to find the information, or determine whether the information has been provided at all. We recommend the city address the concerns raised in this letter so that it can have a solid, defensible factual basis for this UGB expansion.

Maybe the most interesting thing is the rhetoric of "recommending" not "requiring." Because the proposal is to add less than 50 acres to the UGB, the DLCD has only a kind of advisory role, and is not an adjudicator. So it seems like the SRC team could just pretty much blow off the recommendations and see if in any appeal process LUBA makes the recommendations mandatory. Maybe it's more complicated than that - but relevant question here is more "who has the power" and is less the technical question of "what is the best analysis."

News from last nights Public Hearing is that the record will be kept open at least through Wednesday the 19th, ending at 5pm.

That's incrementally helpful, I suppose, but it doesn't really address the problems with Statewide Planning Goal 1 on "Citizen Involvement." In the face of the blizzard, it's something of an empty courtesy. It's not very generous, not oriented towards finding the truth or findings based on best available information.

One of the especially forbidding aspects of the blizzard created by the document dump is captured by part of the LUBA decision, SCAN v. City of Salem and Salem Hospital. 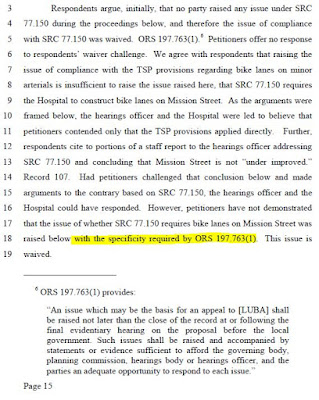 
petitioners have not demonstrated that the issue of whether SRC 77.150 requires bike lanes on Mission Street was raised below with the specificity required by ORS 197.763(1). This issue is waived.


An issue which may be the basis for an appeal to [LUBA] shall be raised not later than the close of the record at or following the final evidentiary hearing on the proposal before the local government. Such issues shall be raised and accompanied by statements or evidence sufficient to afford the governing body, planning commission, hearings body or hearings officer, and the parties an adequate opportunity to respond to each issue.


Absent a more developed argument based on the requirements of SRC 220.005(f)(3)(B), petitioners’ arguments under these assignments of error do not provide a basis for reversal or remand.

It is not necessary to review the specifics of any of those arguments on the Blind School, which had been drafted with great care. Even so, LUBA wanted more. What appears meaningful is the expectation of even greater sophistication and development in the arguments contesting a land use decision, a complexity it may be impossible for citizens to develop in just a few days before and after a Public Hearing.

The DLCD letter is something of an appeal to this requirement for specificity - but who will enforce it? How do we get there?

It'll be interesting to see how this plays out. (Do you know of some factor that makes for a more optimistic reading of all this?)
Posted by Salem Breakfast on Bikes at 7:00 AM