Provincialism as Liability: Earthquake may Strand Salem without Surgeons


Promoting the Salem area to incoming physicians can be challenging: The cost of living in Salem is comparable to other parts of the U.S.; reimbursements are lower in small-population states such as Oregon; and Salem's demographic size can be a tough sell to a new medical school graduate from Chicago, Seattle or New York.

And back in 2012 when the corporate office of Holiday Retirement relocated to the Portland area: 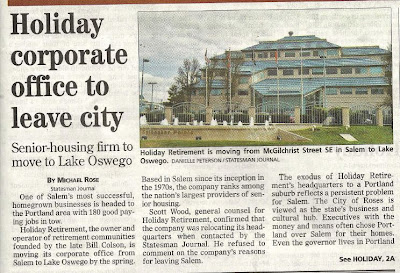 The exodus of Holiday Retirement's headquarters to a Portland suburb reflects a persistent problem for Salem. The City of Roses is viewed as the state's business and cultural hub. Executives with the money and means often chose Portland over Salem for their homes. Even the governor [Kitz at that time] lives in Portland and commutes to Salem. When businesses and their employees flee Salem for Portland, money and community leadership go north as well....

Company officials told the Business Journal that it wanted to be in a metropolitan area, close to a major airport as well as its vendors and investors. They also noted that many of Holiday Retirement's employees already lived in the Portland area....

And a couple of years before that, in conversation a substantial Salem business owner said that six of the seven senior managers chose to live elsewhere at that time.

When we want to define ourselves as "not-Portland" or "not-Eugene" or "not-urban," there are costs to succeeding in that, and the loss of highly skilled, highly educated specialists is probably one of them. Our proud provincialism goes overboard sometimes, and there are ways we might instead want to be more attentive to - indeed sometimes straight-up copy even -  things Portland, Eugene, or other more cosmopolitan cities do better.

For earthquake prep this is a secondary point, to be sure, and no matter what Salem was like, some people might still wish to live in Portland. But there are strategic reasons to reconsider our provincialism and attachment to Salem's "uniqueness" and to give more thought to times they might hinder rather than help us.
Posted by Salem Breakfast on Bikes at 7:00 AM

These are all great observations SBOB. Thanks. You could also have written about the article's silence on the fact that if we don't get busy and retrofit our bridges across the Willamette, Salem Health may have to commandeer the Willamette Queen to ferry injured people across the river to the hospital in the next Cascadia event. Are they planning for that?