Thursday brings three meetings of some significance. Our Area Commission on Transportation, the City's committee on granny flats, and the Grant Neighborhood all meet.

Our local Area Commission on Transportation, known variously as MWACT and MWVACT, meets on Thursday the 3rd, and a couple of items are interesting to note. (Agenda and packet here.)

On the Enhance Non-Highway funding cycle for 2018-2021, both the County Hayesville bike lanes and sidewalks and the Salem crossing projects made the final cut. Absent an unpredictable melt-down, they're in the bag and they will be funded. (For previous notes and more details, see posts here.)

Two of the crossings are on the Winter-Maple Bike Boulevard, including one where a person driving struck and killed Caroline Storm.

It's great to see funds programmed on these crossings in advance of any developments on the Bike Boulevard project itself.

On the "Fix-it" list for the same 2018-2021 cycle, a bunch of ADA curbs and ramps or other ADA work look to be programmed for Wallace Road (OR-221) between Edgewater and Michigan City Lane.

In the minutes from the July meeting, there is a packet of protest over the Yamhelas Westside trail. Here is the cover letter:


I'm...a Yamhill county resident and farmer opposed to the Yamhelas Trail proposal for several reasons. It would be a misuse of public funds for a non-essential use. That applies to the initial matching funds expenditure plus ongoing maintenance costs. It negatively impacts farmers. It violates the intention of land use laws. Its claims to economic improvement are empty rhetoric.

The Connect Oregon application contains only letters of support, few from the private sector. It's easy to be in favor of spending other people's money with little to lose if you're wrong. Why isn't there an accompanying economic impact statement vetted by successful business people? Is this an effort to force the majority of taxpayers who don't ride bikes to pay for a hobby enjoyed by a very few?

This isn't essential transportation. The County intends to treat the trail as a park for maintenance purposes, the cost of which they haven't disclosed. Optimistic estimates (page 38) are for 5-6 students and workers to use the trail daily to bike to school or work. All other uses are non-essential. It states (page 31) the project is "not urgent". What is urgent is the County funding its share of a $22 billion PERS shortfall and health care costs for County workers that are escalating at over 30% a year. These crises weren't known when the Trail plan was hatched. Shouldn't we manage fiscally for the new reality?

This intrusion into an exclusive farm use zone will bring trespass, squatting, crime and the potential for law suits. It happens around the County all the time. Promises that it won't happen here are not creditable unless existing messes are cleaned up 100%. New restrictions on corridor farmers would be certain, reducing their incomes and property values. Is anyone concerned about protecting farmer's property rights?

The application mentions bike safety. Who isn't in favor of that? The bigger question is who pays to fund infrastructure and safety solutions that only benefit bike enthusiasts?

The Farm Bureau asserts LCDC requires a conditional use permit containing an agricultural impact study to allow this proposed project. Farmers on the corridor don't recall such a study. One Commissioner says that no study is needed. Is there no concern about the effects this Trail would have on corridor farms? Are elected officials from the city fully appreciative of the needs of rural county residents? Has the planning process been adequately transparent, or just carefully calculated?

The application claims the Trail will stimulate wine tourism. Domaine Serene is nearing completion of a $25 million wine tasting room that has no bike racks. Other wineries have spent over $100 million on B&B's, event venues, an air museum and more. How many have bike racks? Maybe these successful businesses are just stupid, or are the claims of Trail proponents misguided? Maybe the Trail proponents have a different agenda than the ones stated in the application. Either way, are we to assume it is a good idea to fill shoulderless secondary roads that lead to wineries with groups of drinking bicyclists?

Leave the old rail line on the tax rolls for what I guess are 99% of us that don't bike recreationally.

It is interesting to see how the NIMBYism is framed up, and often in an unfounded way. When Corvallis and Albany were working on a connecting trail through some farmland, they encountered similar objections - and it may be that more thought needs to be given to working with adjacent farmers when trails or rail conversions are proposed.
For more about the Enhance cycle in 2018-2021, see all notes here. ODOT's page is here.

Here's the presentation and meeting notes from October 5th. 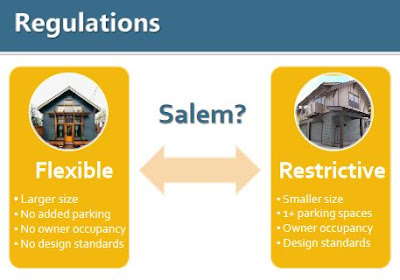 The big question is where to put Salem's proposal on a spectrum of "flexible" to "restrictive" - and therefore how easy to make it possible to actually do them, as opposed to just talk about them. Meaningful numbers will almost certainly require a more flexible approach. Space and siting, with concerns about privacy and parking, were also themes.

Something that wasn't much discussed it seems was financing. It may be that we need new loan products. Federal requirements interfere with a lot of mixed-use and missing middle kinds of housing, and this may be another instance of a gap.

The reports and full document library are being filed as part of the EOA-HNA project.

The meeting was so packed last month they had to shift two items to this month!

Agenda items on Jason Lee Memorial Methodist Episcopal Church and on Heritage Films were deferred and appear on this agenda. (See previous note for more.) Also from last month, Grant submitted a letter in opposition to the UGB Expansion:


The Grant Neighborhood Association has discussed the Urban Growth Boundary expansion proposal and unanimously voted against the proposal. Our primary reason for not supporting the proposed expansion s are that we still have large amount s of undeveloped land within the urban growth boundary and we do not support the 3rd bridge. We urge that Salem City Council to not approve the urban growth boundary expansion.

The Grant Neighborhood Association meeting is on Thursday the 3rd, with a potluck at 6:30pm, and the general meeting at 7pm, in the Library of Grant Community School, 725 Market St NE.
Posted by Salem Breakfast on Bikes at 1:00 PM