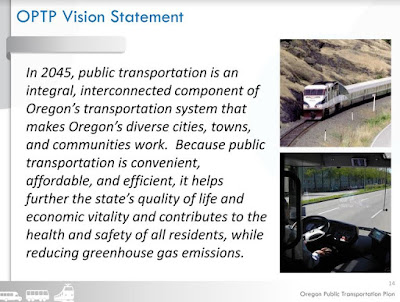 ODOT is working on another statewide plan, this time for transit:

ODOT’s work began with research on existing conditions and possible plan topics. ODOT conducted interviews with a sample of stakeholders from around the state regarding what may need to be considered in the plan. These stakeholders' initial advice is captured in the OPTP Summary of Stakeholder Interviews (PDF).

ODOT’s research on current conditions and opportunities for public transportation included a survey of public transportation providers and a workshop at the 2015 Oregon Public Transportation Conference, See the summary of themes and ideas from the survey and workshop for what was learned. Survey results can be seen in the OPTP Workshop and Provider Survey Summary (PDF).

They're holding an Open House today at the Chemeketa Center for Business and Industry at 1pm. It's probably too late for that, but there's also an online version (from which the slide above is taken).

The fact that public transportation is not an "integral, interconnected component" and that we have to push that out for another 20 years - well, that tells you a lot about where the project is. It would be great to have a lot more urgency and funding behind it.