Maybe you will know otherwise, but I don't see any language about "earthquake" or "seismic event" in chapter 660 of the Oregon Administrative Rules that will govern the decision on the Urban Growth Boundary for the Salem River Crossing. There is Goal 7 about "Areas Subject to Natural Disasters and Hazards," but I couldn't find any corresponding rules. (Do you know where they are?)

So the fact that the SRC is proposed for unsuitable soils may not be directly relevant to the approval criteria of that Hearing. From here, for a non-specialist, it's hard to fit into the framework of the UGB decision.

Still, the Geology Final Technical Report Addendum is out, as are all the other addenda, and posted to the City website late last week.

It does not inspire confidence. And it seems relevant nonetheless.

ODOT's Big Project on Unstable Soil was a Disaster

The other day you might have heard about the "Play on the Grade" event to commemorate the forthcoming opening of the Highway 20 Pioneer Mountain to Eddyville project.

But that's a big happy face on an embarrassing and costly mess for ODOT.

From the ODOT timeline:


In 2005, the Design Build contract was awarded to Yaquina River Constructors(YRC) (Granite Construction).

2006 winter rains caused erosion and sediment to flow into the creeks and streams. This resulted in DEQ fines of $240,000 to the Design Builder and $90,000 to ODOT.

2010 The Design Builder determined that columns at Eddy ‘B’ Bridge were out of plumb. Further investigation determined that the columns at Cougar Creek Bridge were similarly out of plumb. Eventually the Design Builder reported that the four landslide locations were still moving; the landslide mitigation constructed in 2008—the buttresses and shear keys—had failed.

2011 No substantial construction was completed in the sections containing the four landslides and bridges since the continued movement was discovered in early 2010.

In 2012, ODOT and YRC negotiated the end of the Design Build contract and ODOT took over management of the project.

About it the Portland Tribune writes:


Months before the Oregon Department of Transportation asks the Legislature for a massive increase in taxes and fees to support new spending on roads and bridges, the agency plans to “celebrate” a newly completed project that went $230 million over budget and seven years past the original due date — all to straighten a 10-mile stretch of highway....

[T]he Route 20 project has “been in some very dark spots ... certainly this project had plenty of opportunities to learn.” [says ODOT]

Those “opportunities” included replacing a contractor for allegedly poor work after paying it $162 million, and blowing up four brand-new bridges that cost $17.1 million, according to a four-part investigative series by Winston Ross of the Eugene Register-Guard in 2012. The series quoted documents and observers to pin the blame for the overruns on bad outsourcing as well as ODOT’s practice of awarding projects to the low bidder.

The project was built on unstable soils and land. At many decision points they failed to take this into account properly. I don't know what was the original budget, but the final cost looks to be at least 2x more, and probably closer to 3x or 4x more. It had vast overruns measured in tens, even hundreds of millions of dollars.

The SRC is also Proposed for Unstable Soils

The proposed route for the River Crossing is also across unstable soils and land.

The final Geology Final Technical Report Addendum identifies it as crossing the three worst categories of unstable soil:
But the apparent conclusion, section 5.3 "Findings," is dithery, full of weasel words, all anchored by "could." There are no "findings" here, no conclusions. It's all nebulous possibility. Note especially the uncertainty in the final sentence about the possibility of safe construction. 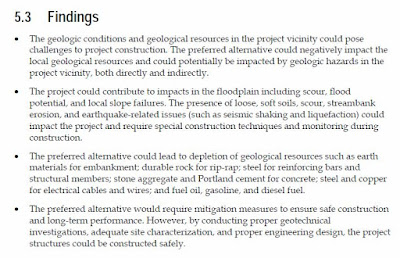 Even if the Salem River Crossing were necessary (and of course the position here is that it is not), the likelihood of very large cost overruns is so probable that it can be reckoned a certainty. 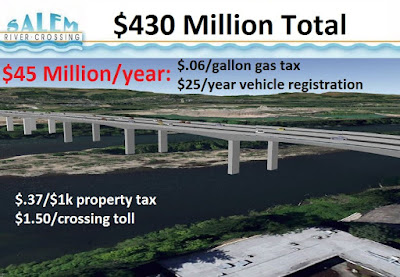 Suppose you think the current estimate of $430 million, which will be closer to 1$ billion after debt service and all, is reasonable.

While ODOT and the City of Salem do a good job on small and medium-sized jobs, ODOT has a terrible track record, and in fact all agencies do, on mega projects. (See Bent Flyvbjerg's research.) There is strong evidence, internal from ODOT and external from published academic studies, that the actual cost of the bridge would be double or triple the initial estimate.

So how do you feel about a bridge that costs $2 or $3 billion after debt service? Is it still a value to you?

For comparison, our 2008 "Keep Salem Moving" Road Bond was $100 million all by itself, and that has funded about 60 different projects of varying size. Bond savings are still being used this year on a new crosswalk near WESD. $100 million is a lot of money!

The Geology Report is Cavalier about Earthquake

There's also some funny math and probability and other balderdash in the report. 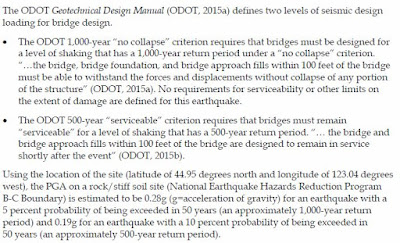 What the heck does this mean? Right now in our current geo-historical moment, we know there's a much larger chance than 5% in the next 50 years of the Cascadia Subduction Zone quake. We are due soon for the big one, not hypothetically over some distant future "return period" of 500 or 1000 years. A year-old piece described the probability of an magnitude 8.0 or greater:


The central part of Oregon is on the order of 25 to 30 percent [in the next 50 years]. That's from central Oregon southward, on the coast. Then for southern-most Oregon and in northern California it bumps up a little bit more: 37 to 40 percent.

And at least to a non-specialist, the soils over which the SRC would pass are in no ways "rock/stiff."

To a non-specialist, the whole discussion in the Geology Addendum looks like utter nonsense. Just flat out wrong and misleading.

In a 100 year lifespan for a new bridge - that's about what we should build for, right? - the best available information is that the odds of a huge earthquake are better than a 50/50 coin flip in the next century. So anything we plan and build should assume much greater than a 5% chance of an earthquake. Anything we plan and build new from here on out should assume a 100% chance of a huge earthquake!

In Every Way the SRC has Unstable Foundations

The Preferred Alternative as it is discussed in the Geology Addendum looks to be engineered for a mid-sized earthquake only. It doesn't look like it's reinforced to megaquake standards. So there will likely be overruns and it will still collapse!

And to make it actually stable to the megaquake standard would add much, much more, and multiply its already overrun cost.

Even if you think we desperately need the SRC in its present form, the current budget is not realistic and it will cost even more for the class of seismic stability we actually need.

Given those additional costs, is it still worth it?

The answer here is no.

Again, this may not fit easily into the strict framework for evaluating the proposed UGB expansion, but that seems like a fault in the process and its rules, not an irrelevancy. It is not cost-effective or reasonable to plan such a large project for soils known to be unstable in for a lifespan in which we expect a large earthquake.
Posted by Salem Breakfast on Bikes at 7:00 PM

Very briefly, there's some minor funny business on the City website. There was a cluster of Technical Addenda posted on 9/29 with that date. They have disappeared and there's a much larger flurry of new reports with dates of 10/5 and 10/6. Of the Addenda that were also posted on 9/29, the new versions have slightly different names. Whether the text is any different is not yet certain. Maybe it's nothing, but it looks a little hinky.

(Edit: Swapped in new url for Geology Addendum, as the old was had become linkrot.)

A reader sends along some more data.

But the actual cost nearly tripled, to something between $70 and $75 million.

Even "ordinary" large projects, not just megaprojects, are likely to go well over initial budgets and cost estimates.

By a "preponderance of the evidence" standard, there is little reason to think that the SRC cost estimates are reliable. That would be a huge exception, not the norm.

There are two documents that can be used to determine a range of peak earthquake acceleration the Salem River Crossing will be subjected to when the Cascadia Subduction Zone earthquake occurs. This information is in the public domain and is readily available.

Those documents convinced me that the documents supporting the SRC are political, not factual. I would expect the geological report to be specific about the earthquake hazard of the proposed location, the earthquake's predicted magnitude and intensity, and the peak acceleration the bridge must withstand to be usable.

I believe the geological report was written to minimize the estimated cost of the SRC. If the cost is too high, it is even more unaffordable and voters would not approve of the increased tax burden needed to finance the SRC.

The State of Oregon's Department of Geology and Mineral Industries produced GMS-105, "Relative Earthquake Hazard Maps of the Salem East and West Quadrangles, Marion and Polk Counties, Oregon", by Y. Wang and W. J. Leonard. The study was funded in part by the City of Salem and Oregon State Lottery Funds appropriated to the Oregon Department of Geology and Mineral Industry Studies.

It is comprised of four plates (maps):

Plate 1, Liquefaction Susceptibility Map of the Salem East and West Quadrangles, Marion and Polk Counties, Oregon. This map shows that the location for the proposed Salem River Crossing is located in a category 4 liquefaction zone, >= 18-24 feet estimated thickness of liquefiable material.

Plate 2, Amplification Susceptibility Map of the Salem East and West Quadrangles, Marion and Polk Counties, Oregon. This map shows that the location for the proposed Salem River Crossing is located in a category 4 amplification zone that has a >1.6 amplification factor for peak rock accelerations.

Plate 3, Landslide Susceptibility Map of the Salem East and West Quadrangles, Marion and Polk Counties, Oregon. This map shows that the location for the proposed Salem River Crossing is located in a category 0 landslide zone that has <6 degrees of slope angle in valley.

Plate 4, Relative Earthquake Hazard Map of the Salem East and West Quadrangles, Marion and Polk Counties, Oregon. This map shows that the location for the proposed Salem River Crossing is located in hazard Zone A, the highest hazard zone for earthquakes, i.e. structures in this zone are expected to experience the strongest forces generated by an earthquake.

This might be worth a full post on its own. Strong Towns posted a link to the Antiplanner's comments on Flyvbjerg's new book, The Oxford Handbook of Megaproject Management."

The Antiplanner is conservative and libertarian, a great critic of bikes and transit, and is all about cars, cars, cars, and more cars.

And yet he also is a great critic of megaprojects. It's worth a read.

And the Highway 97 project is dead now:

“This agency has failed in this project,” Garrett said. “It also should be noted we failed in probably the highest calling as a public agency, and our stewardship responsibility.” '