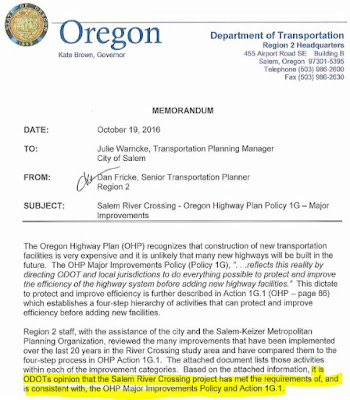 Now that the initial comment period has closed, the SRC team is posting a flurry of responses and documents. One of the interesting ones is titled "Salem River Crossing - Oregon Highway Plan Policy 1G - Major Improvements." In it, ODOT claims that


Based on the attached information, it is ODOT's opinion that the Salem River Crossing Project has met the requirements of, and is consistent with, the OHP Major Improvements Policy and Action 1G.1.

So let's look at their case. (The memo is italicized and indented here: Bold italics are in original, regular italics are added. Roman type is commentary and not in the memo.) 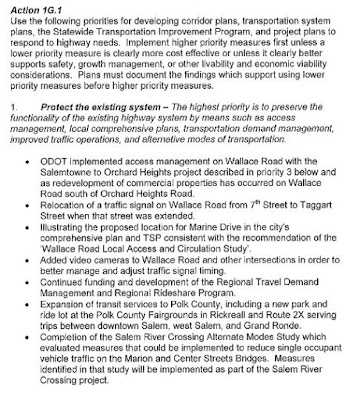 As part of the introductory material they write:

It seems to me that analysis ODOT offers to support these claims is generally weak and largely not supported:
The first and highest priority in Policy 1G:


So let's consider what is missing here: 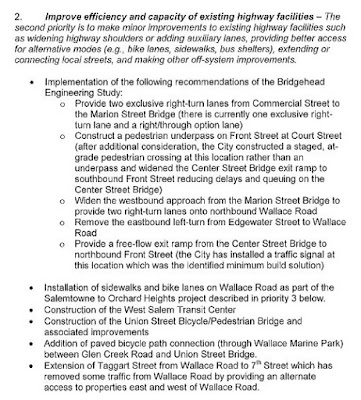 The next priority for efficiency:


Again, let's look at what's missing.
So we come back down, I guess, to norms and the way you parse "implement." It may be that there is a set of norms and a settled interpretation for "implement" that accepts a proleptic sense for "implement" and does not require that implementation be actually carried out first. Hopes and wishes and vague plans may be sufficient to demonstrate "implementation." But it is the claim here that this violates the ordinary sense of the word "implement," and that we should want to change the way it is customarily interpreted if it is allowed to have this meaning.

Like we should really, really try very hard to do stuff, real stuff, before widening and constructing new highways!

Not just give a courtesy wave and bulldoze merrily along with new highway infrastructure.

Why is it not obvious that we should throw $50 million at Cherriots and Rideshare and walking and biking before we propose to spend $500 million on a new bridge and highway? In what world is this not a more reasonable and thrifty and sustainable approach? (Why, our world of course!) The SRC team will appeal to the TSM/TDM and 8% memos. "But weee studeeed it and it wonnn't work."

We know no such thing! The modeling for car traffic was totally busted for the past decade, and also failed to predict the sudden uptick of the last year or two. It's broken; it doesn't work. Beyond those failures there are many reasons to think that we lack a very precise model for transportation choices other than drive-alone trips. Between the levels of uncertainty and the high cost of a new bridge and highway, we should experiment rigorously for options other than drive-alone trips. Expansion with new auto facilities should be the "last resort." That's what Policy 1G seems to say.

As for "implementation," it may be that we need to crystallize a new set of norms around what it means to implement alternatives to drive-alone trips first and to implement them seriously. Apparently our current interpretive norms don't require taking the word "implement" very seriously. But even in a system of interpretation with a severe autoist bias, there is a plain meaning of the word "implement" that should support the interpretation here.

The remaining two priorities in the memo,"Add capacity to the existing system" and "Add new facilities to the system," are immediately not relevant here. Fans of the Wallace Road Local Access and Circulation Study and the Bridgehead Engineering Study may have more to say on specific auto capacity measures that are being overlooked at the ends of the bridges. (This is potentially relevant to the question whether facilities within the UGB can accommodate the transportation need. I just want to focus on things other than drive-alone car trips right at this moment. That's the part of 1G I think is being badly neglected.)
Posted by Salem Breakfast on Bikes at 1:00 PM