Neglected here in the hullaballoo over the proposed Urban Growth Boundary Expansion for the Salem River Crossing, the project for a new Lansing-NESCA Neighborhood Plan is in the midst of an interesting phase on transportation.

Earlier this month, they talked about buses and cars in the neighborhood. 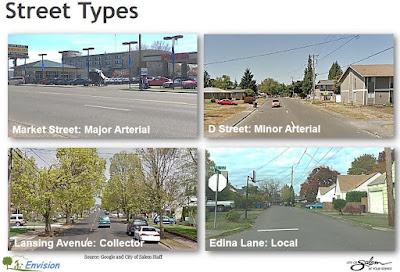 The presentation moved nicely in the direction of plain language - "buses and cars" - and offered a small primer on some of the jargon and essential concepts the City uses in transportation planning.

So in addition to being useful for the neighborhood iteself, it has some value as a general resource. So check it out!

In the meeting notes, the number one value was about D Street:

If the neighborhood could be convinced, D Street could have some gentle "missing middle" townhouses or small-plexes added to make a splendid urban neighborhood street that focuses on walking and biking - and with additional numbers of people, bus service on D Street would be easier to restore! It would also be a great east-west corridor prioritized for biking and walking over auto through-put.

Next month - on Election night, which could be an attractive refuge from the madness or something that depresses turn-out - they'll be talking about walking and biking.

It's nice that motorized vehicular traffic was broken out from active mobility and that transit was given particular attention.

The meeting will be 6:30 p.m. Tuesday the 8th at Salem First Church of the Nazarene, which is located at 1550 Market Street NE.
Posted by Salem Breakfast on Bikes at 12:01 PM

So glad that D Street might be protected from widening. With the redevelopment of the North Campus there is a temptation to widen the street. If this were to happen, one of the most pleasant streets in northeast Salem would be lost. The tree lined street with the adjacent open spaces needs to be preserved!

Even as you move further west along D Street the charm continues.

I agree D Street is a one of the nicer main streets in the area, but I don't see how bike lanes can be added without making the street wider. In the three years I've been biking in that area, traffic has seemingly increased two-fold and cars often travel much faster than the speed limit. I usually bike on the sidewalk when I have to use it, but I normally take Nebraska to avoid as much of D as possible. I'd be interested to hear how to make this street more pedestrian\bicycle friendly without widening it.

The solution to making cars behave on D is to add bike lines and NOT widen it.
Traffic engineers have long known that drivers drive as fast as conditions allow, and the major determinants are width, sightlines (curvature), and road surface. D is wide, flat, smooth, and straight -- so drivers respond accordingly.

By narrowing the road with bike lanes, drivers will slow down.