A while back N3B observed that there was a significant Heron rookery on McLane Island and that the bridge and its construction activity would disturb it.
As with the Geology Technical Addendum, the Wildlife report is cavalier and shallow. Other agencies and organizations also echo the notion that the level of study and communication to this point is shallow and incomplete. From multiple sources and angles, not just transportation advocates, there is an accumulating body of evidence that the SRC is being rushed at this moment.

(Which is ironic since it has been going on for a decade! It is likely that elements of rushing and superficial analysis are a product of a bad project: If the SRC was such an obvious good thing, we would see more concise reports with greater clarity in conclusions and more frictionless communication, with longer lead-times, between agencies. It wouldn't all come to this last-minute rush. The lurching and clogging and uncertainty is a kind of epiphenomenon arising out of a dumb idea and poorly designed project. A sound project would be so much easier to process and there would be something closer to a positive consensus.)

Here's what the SRC has to say in the Wildlife Technical Report Addendum*: 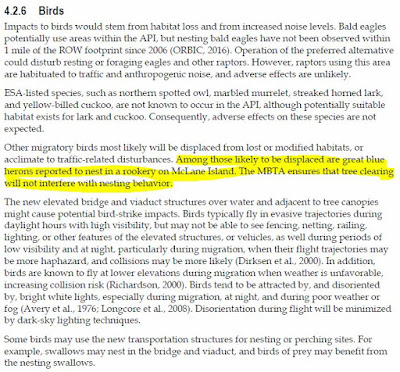 Impacts to birds would stem from habitat loss and from increased noise levels. Bald eagles potentially use areas within the API, but nesting bald eagles have not been observed within 1 mile of the ROW footprint since 2006 (ORBIC, 2016). Operation of the preferred alternative could disturb resting or foraging eagles and other raptors. However, raptors using this area are habituated to traffic and anthropogenic noise, and adverse effects are unlikely.

ESA-listed species, such as northern spotted owl, marbled murrelet, streaked horned lark, and yellow-billed cuckoo, are not known to occur in the API, although potentially suitable habitat exists for lark and cuckoo. Consequently, adverse effects on these species are not expected.

Other migratory birds most likely will be displaced from lost or modified habitats, or acclimate to traffic-related disturbances. Among those likely to be displaced are great blue herons reported to nest in a rookery on McLane Island. The MBTA ensures that tree clearing will not interfere with nesting behavior.

The new elevated bridge and viaduct structures over water and adjacent to tree canopies might cause potential bird-strike impacts. Birds typically fly in evasive trajectories during daylight hours with high visibility, but may not be able to see fencing, netting, railing, lighting, or other features of the elevated structures, or vehicles, as well during periods of low visibility and at night, particularly during migration, when their flight trajectories may be more haphazard, and collisions may be more likely (Dirksen et al., 2000). In addition, birds are known to fly at lower elevations during migration when weather is unfavorable, increasing collision risk (Richardson, 2000). Birds tend to be attracted by, and disoriented by, bright white lights, especially during migration, at night, and during poor weather or fog (Avery et al., 1976; Longcore et al., 2008). Disorientation during flight will be minimized by dark-sky lighting techniques.

Some birds may use the new transportation structures for nesting or perching sites. For example, swallows may nest in the bridge and viaduct, and birds of prey may benefit from the nesting swallows. [italics added]

It seems pretty clear that this was an "arm chair" investigation, conducted by desk, and that no actual wildlife survey or other field investigation for birds was conducted!

Other groups have highlighted incompleteness or shallowness.

There is no archeology Technical Addendum, and as N3B has reported, Dr. David Lewis, an anthropologist and a Grand Ronde tribal member, testified to Council that the archeological investigation of the footprint for the Preferred Alternative has not been completed and that there remains a significant chance there is a culturally and historically significant Kalapuya campsite, village, or burial grounds in the study area, particularly on McLane Island.


As part of the 35- day notice, the city provided the Department of Land Conservation and Development with the some of the required findings . Those are address ed below. Missing from the initial proposal were findings for Goal 10 (H ousing) and division 8, Goal 12 (Transportation) and division 12, and Goal 14 (Urbanization), division 24 and division 38. We received those draft findings on Thursday September 22, 2016; consequently, this department has not had adequate time to review and include comments in this initial participation letter....

We recommend the council continue the hearing on this matter so that it can review state findings that will help it determine if this proposal is in compliance with state statutes and the statewide planning goals.


Willamette Riverkeeper is the key partner with the Oregon State Parks and Recreation Department in regard to the Water Trail, and no OPRD staff or our staff have heard of this proposed change until recently. In fact, it seems OPRD has not been notified of this significant proposal by the City of Salem.

Having a bridge over this island is very problematic for public use, and for wildlife. Further, bridge piers placed in the side channel around the island would also pose unnecessary risk to river users. In our view, it seems some critical communication has not occurred with the State of Oregon, or with local river organizations....

I urge you to postpone a decision until further analysis has been done that adequately reflects the requirements of the Willamette Greenway, the Oregon State Parks and Recreation Departments property at McLean Island, and further engages the public in a meaningful way.

So we have First Peoples, DLCD, River Advocates, and wildlife interests all pointing to an inadequate analysis and insufficient communication.

By itself, the lack of detail on the Heron rookery might have been an accident or otherwise something minor and fixable. But it is clearly part of a larger pattern of skating over significant details in an attempt to jam through a bad project.
* It's hard to know how significant this might be, but the City posted versions of the different Technical Addenda to the City website on September 29th. Over the last day or so, they deleted these and posted new versions with dates of October 5th and 6th.

I don't know what that means, but it's not a good look. I haven't found any textual differences other than a red stamp of "draft" across the cover sheet of each. But there could be other more significant changes buried in the texts. If the SRC already has a credibility problem, this doesn't help. 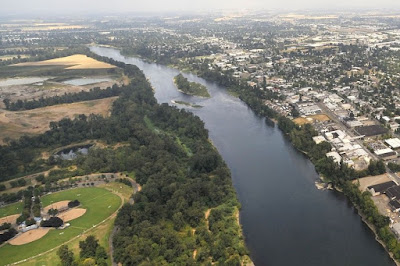 Complaining about the paper is such a dead horse (though as Hinessight reports, a transition in Executive Editor is underway, and a sale on the 280 Church Street building looks like it was recorded on August 23rd or thereabouts, so there are newsworthy developments at the paper it is not itself reporting on!), but it seems worth noting that on Sunday this great photo of the River, McLane Island, and part of the route of the Preferred Alternative appeared in the context of a breezy story on the local economy instead of writing about the proposed UGB boundary expansion. One of those story ideas is more timely than the other!

This might convey the best overall notion of the Willamette River Greenway and what is at risk in the Goal 15 Exception.

The Glenn and Gibson Creek Watershed Council has a detailed letter in the hearing materials list, and it touches on some of the relevant topics. There is a lot in it, and it might be worth reading in full. Here is a summary and two excerpts:


We have six primary concerns about the proposal before you: 1) impacts to the recreational use of the Willamette River, 2) impacts to the floodplain and the failure to consider the recent changes to the federal flood management program, 3) encroachment on tributaries to the Willamette River by Marine Drive, 4) the general lack of attention to the Willamette Greenway in Salem, 5) impacts to agricultural lands, and 6) expressions of community concerns. In addition to the concerns raised in this letter I have attached separately a list of what I see as flaws in the materials presented by the staff that is relevant to your decision (Attachment A)....

The draft EIS has failed to recognize either the ownership of the island by the Oregon Parks and Recreation Department or evaluate the impacts of the proposed bridge on the use of the island as a part of the Willamette Water Trail. McLane Island Landing is the only low impact camping spot in a significant reach of the river (more than 10 miles of river). For those of us that canoe or kayak the river, the presence of a bridge over the island would significantly diminish the experience and the construction of the bridge would provide both a temporary impact to river recreation and a permanent loss of use which is not discussed in the draft EIS....

The recent promises to not impact Pioneer Village structures by the construction of Marine Drive will force the roadway into the riparian area of a small tributary to the Willamette River, likely an old channel remnant (titled Unnamed Slough in the Draft EIS). This channel has year round flow, likely from subsurface discharges and storm runoff. This is an impact that is part and parcel of the River Crossing Project. The Final EIS must evaluate the impacts of these alterations to both the floodplain function and direct losses of riparian and wetland habitats. The impacts will likely require consultation with NMFS and could affect the Final EIS and subsequent permitting.

In totality, it is persuasive that there are additional regulatory processess and standards that must yet be met for the final EIS and Record of Decision.

If water issues and recreation is of particular interest to you, it might be worth reading the whole.

In it, it says there will be another round of public comment and a subsequent decision:


FHWA has made a preliminary determination that project actions will not adversely affect the features, attributes, or activities that qualify the Willamette River Water Trail for Section 4(f) protection. As such, FHWA has preliminarily determined that project actions will result in a Section 4(f) de minimis impact to the Willamette River Water Trail, consistent with 23 CFR Part 774.17.

The project will be publishing a public notice/opportunity for comment with regard to a finding of de minimis impacts to Willamette River Water Trail. Following the close of the public comment period on the published de minimis finding, FHWA will be requesting written concurrence from the City of Salem and Oregon Parks and Recreation Department prior to making a final de minimis impact determination for the Willamette River Water Trail.

Updated with second addendum on a new 4(f) memo on parks and recreation.