It looks this time it's gonna happen. (Or perhaps it's already started? I haven't been by lately, but I haven't seen anything on social media either.)

On September 1st, the City issued a demolition permit for the First National Bank building at 280 Liberty St NE designed by Pietro Belluschi.

So they didn't waste any time on the demolition permit!

According to the minutes from last month's Downtown Advisory Board, Pacific Office Automation will go into the 260 building.

So that leaves the sinking queasy feeling that the 280 lot, the site of the bank building, might remain as surface parking rather than redeveloped as a new building.

It also means that the mixed-use redevelopment proposed for pretty much the whole northern half of that block, including the Old City Hall site, is probably abandoned.

The form of this bank building isn't very good. At street level it totally turns its back on the sidewalk with a blank wall of very dark stone. It's not friendly at all. With its vault configuration inside, it would have always required a lot of modification to give it a useful second life.

But we should remember that our stock of Belluschi's buildings, designed by the most important 20th century architect in Oregon, is quickly being lost:

#6 and #8 are a lock now for demolition, and with the sale of the Statesman building, #5 is increasingly at risk.

That will leave us with two intact buildings off the Willamette Campus.

Consider stopping by to pay your respects and to admire the reliefs. Even though the building was completed in the 40s, Frederic Littman's art looks back to the WPA and the 1930s.

This is very interesting! There is a misidentified building and errant history in our Downtown Historic District. 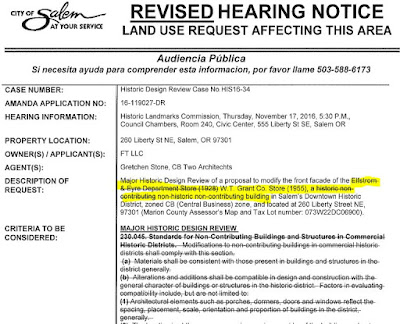 The City has posted a revised Hearing Notice for the storefront and facade work on the building next door to the Belluschi Bank. 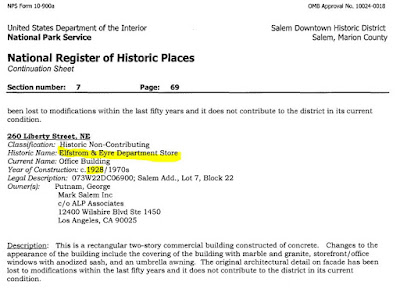 The National Register Nomination Form for the Downtown Historic District is clear in identifying the building at 260 Liberty NE as the Elfstrom & Eyre building.

So we have a mystery!

But it is resolved. In some ways the Staff Report for the meeting on the 17th is more about a detective story:

City of Salem staff completed additional research to confirm this assessment, and after noting that the Sanborn Fire Insurance maps state that the existing building was constructed in 1955, found an article from the Statesman on November 17, 1955 confirming the construction and official opening of the W.T. Grant Co. store in 1955. Further research confirmed that this site in fact has never housed the Elfstrom and Eyre Department Store which was actually located within Salem's downtown at 340 Court (the New Breyman Building) which is still extant. The Elfstrom and Eyre Department Store was moved to 260 Liberty St. S, which may have been the source of the original confusion....

The SHPO [State Historic Preservation Office] has confirmed that the designation should be changed to non-historic, non-contributing....While the official evaluation of the building can only be formally changed by the National Park Service in consultation with the Oregon SHPO...staff recommends that the Historic Landmarks Commission find that teh historic name of this building is the W.T. Grant Co. Building and the construction date for this building is actually 1955. Staff further recommends that the HLC find that the building is non-historic, non-contributing to the Downtown National Register District....

[And] staff recommends that the Historic Landmarks Commission approve the proposal [for the new storefront system].

But this also underscores that an historically significant building will be demolished, and a nothingburger will be remodeled and retained.
Posted by Salem Breakfast on Bikes at 7:00 AM

So sad. I kind of like this building myself. The facade really needs the flags on the flagpole above the door to make it work. If I were the King of Salem I would have told the Social Security Administration that they had to occupy this building instead of the awful one they now occupy on McGilchrist Street. That would have been an fine location for them.

You left one demolished building off the list - the 1941 Ladd and Bush Addition, demolished in the 60s.

Any speculation on new use? Grocery anchor, perhaps.

Since it has long been gone, it has not seemed as important to include it in the current list. But indeed, it is another one we've lost.

Interestingly, it has a black band at the sidewalk also. The Federal Reserve Bank in Portland also has this element, and there seems to have been a basic template he was working from for his banks. The Federal Reserve, however, was completed a few years later - and it has many more windows! That's an important change to the template.

Back to Salem, there is another reference to the Esther Foster dress shop on 260 High Street NE that he designed, but so far it has not been easy to confirm whether this was an interior only or a full building.

And while it is outside the main body of his style, and was completed for AE Doyle's firm, the Telephone building next to the YWCA also counts.

There may be others we don't know about!

On a related side-issue, there's a Hearing Notice for the facade on the 260 building, which is a "non-contributing" building to the downtown Historic District. Even though it's a little old, from 1928, it's been modified and altered enough that it is not own its own an "historic" and "contributing" building.

The designer is CB|Two, who have handled a number of rehab projects downtown and who have always been sensitive to history. The default condition should be trust and high regard for their proposals. (They're human, and they could screw up, but their body of work gives no reason to be suspicious.)

Yet the proposal, for a non-contributing building, has to go through a full Historic Design Review before the Historic Landmarks Commission.

And at the same time, the HLC does not have power and resources to preserve the Belluschi Bank.

Updated with what is a long footnote on the history and mis-identification of the 260 building.

"Salem, Ore. – Pacific Office Automation, an Oregon-headquartered company and the largest office equipment dealer in the U.S., plans to invest in Downtown Salem. The company has purchased a prominent downtown building that has been vacant for more than eight years, and will begin significant interior and exterior renovations at 260 Liberty Street NE in early 2017. Renovations will include new storefront façade, elevator, ADA/seismic upgrades, electrical upgrades, and a sprinkler system....

The interior of the building will be gutted and reconfigured for Pacific Office Automation, who will occupy a portion of the building including ground floor show room space, and to attract other businesses to lease the building.

Total renovation costs are estimated to be $1.3M and the Urban Development Department has received a Capital Improvement Program request to help partially fund the renovations. The company also received assistance through Urban Development’s Site Reuse and Revitalization Program for the building’s Phase 1 Environmental Assessment. The property owner’s priority is the renovations of the building for Pacific Office Automation and the timeline and plans for the demolition and redevelopment of the adjacent property located at 280 Liberty Street NE will be forthcoming."

Shoot. The paper's got a story about the incipient demolition and conservation of the Littman reliefs. Mayb more to say on it in the next couple of days.