Greenwashing the SRC? Air Quality/Emissions and Energy Analyses may not Match


Our 2016 Harvest began before September, the first time ever on August 30th, and ended one month later, September 30th , never touching October for the first time ever! With this vintage showing earliest-ever Budbreak and earliest-ever Harvest timing and with almost non-existent rain, this could be California! However, it wasn’t all Baja-Oregon in nature, since the heat didn’t bake things as searingly as the last three years....

Note the "first time ever" and "earliest-ever" bits.

Even though the fall so far has been crappy and wet, because the nights haven't cooled off October has still been much warmer than usual here.

You might have seen this chart floating around, which projects the year-end temperature average based on the January to September temperatures recorded so far. It looks pretty linear, and make it clear that 2016 will be the new warmest year. 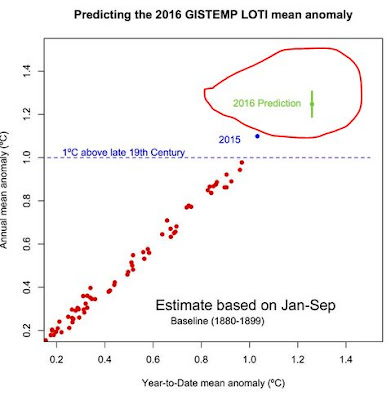 It is tiresome to repeat, but also urgent to repeat. We are warming. And the rate of change appears to be increasing.

So it is especially frustrating to read in the latest round of SRC memos an additional note on "Energy Impacts."


As stated in Section 4.2.1 of the draft Energy Final Technical Report Addendum, the preferred alternative would result in a 16.1 percent increase in operational energy consumption in 2040 compared to the No Build Alternative (Section 4.2.3 of the draft report mistakenly noted a “3.9 percent increase...” -- that value should also be “16.1”; this has been corrected in the draft report). However, current and future improvements in non-fossil fuel vehicle technologies as well as coordinated land use and transportation planning efforts may substantially offset these energy usage impacts. Mitigation efforts to offset potential increased energy usage could include increasing non-single-occupancy vehicle mode share across the Willamette River, such as those outlined in the Salem Willamette River Crossing Alternate Modes Study (CH2M, 2010). Encouraging the use of alternatively?fueled vehicles and developing the needed associated infrastructure throughout the study area should also be supported.

Farrago? Can I use the word farrago?

Let's start with:
You know that the #1 Candidate for "coordinated land use and transportation planning" to decrease energy and emissions in the study area is?

Holy crap, the language in the memo is a whacked-out Orwellian doublespeak. The "needed associated infrastructure throughout the study area" should be build instead of, not in addition to, or to offset, the new problems created by a giant bridge and highway.

Table 4.2-1 of the Air Quality Addendum is more difficult to consider. I don't understand it exactly yet. First off, there's nothing about CO2 in it, just CO. So I'm struggling to understand how something that consumes 16% more energy per year in operational energy use (chiefly driving!) will actually generate less CO2.

One hypothesis: The pollutant analysis isn't over the same area as the energy analysis. The energy analysis was regional, accounting for more of the effects of "induced demand," and this analysis might just be of the bridge. In the narrower scope, it might possible to tweak results to appear to show that minimizing delay and idling on the bridge crossing itself would also reduce pollution. But this analysis would exclude effects caused by the larger total VMT that the analysis also suggests the SRC will also induce.


Appendix D provides the calculated emissions burden values for 23 origin-and-destination pairs. These values include the forecasted VMT, average speeds used, and the 2012 and 2040 MOVES2014a emission factors.


The Energy Addendum (which claims the 16% increase) says


Automobile and truck traffic volumes and speeds were calculated separately for each of the routes between the 152 analysis links described in Section 2.1

So from here "23 origin-and-destination pairs" looks like a considerably smaller data set than "152 analysis links."

That is reason to think this is might not be an apples-to-apples comparison, and that the SRC team could be, by accident or by design, skewing results in order to greenwash the SRC and argue that it has less effect on greenhouse gases than is likely to have.

This conclusion must be tentative at the moment, but "there are questions" about the two analyses and whether the claim that the bridge will reduce emissions is actually a reasonable one or the best one.

Yes, the Energy Addendum appears to confirm a different analysis method. From the intro to Section 3.1:


The FEIS employs a traffic link-level analysis for the purposes of calculating energy consumption, as opposed to the Origin-Destination (O-D) Pair analysis employed in the DEIS Energy Technical Report. The link-level analysis was employed in order to maintain consistency with the Transportation Technical Report, which did not use O-D Pair-level information, and also represents current best practices for transportation and energy impact analysis. The link-level approach employed in the FEIS analyzes a greater number of shorter street link distances when compared to the DEIS O-D methodology; as a consequence, energy consumption results are substantially lower when compared to the DEIS.

While this passage addresses directly only a shift between draft and final EIS Energy reports, the difference between a "traffic link level analysis" and "Origin-Destination Pair analysis" looks directly relevant to the differences between the Air Quality and Energy Addenda.

Even if it is not a direct attempt to greenwash, though it might be, it is also a careless moment in apples-to-oranges analysis to say

An Air Quality analysis that used the same method as the Energy analysis, which found an increase in 16% energy consumption, seems likely to find an increase in pollutant emissions.
Posted by Salem Breakfast on Bikes at 11:30 AM

At one of the early dog-and-pony propaganda shows for the G--D--n thing, conducted in the then-spanking new building at Union and High, I made a big deal about this boondoggle and the obvious need to abandon it in the face of the impending climate catastrophe, only to be reminded by Ms. Warncke that CO2 is not a criteria pollutant at all!

a) knowingly pushing their and everyone else's children and grandchildren off a cliff of unknown height in the dark, or

b) becoming increasingly committed to the Donald J. Trump denial strategy ("climate change is a hoax created by the Chinese to hurt American manufacturing).

Either one is reprehensible.