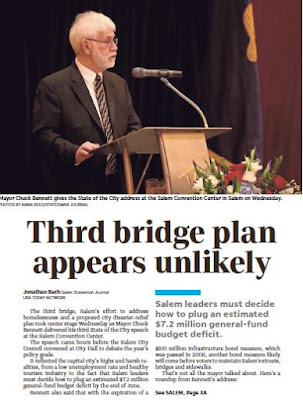 Yesterday the Mayor gave an annual "State of the City" address, and the Mayor lamented difficulties on the Salem Rivercrossing and tried to rally supporters in the face of increasingly doubtful prospects for the SRC. It was spin. With gloom-and-doom alarmism, he shaded matters to put his case in the best light and verged sometimes on outright misrepresentation.


Bennett didn't have good news for proponents of building a third traffic bridge over the Willamette River, saying the proposed crossing is "teetering on the brink of failure."

"Council action on the project’s environmental impact statement will occur in the next couple of weeks, and it will either be build or no-build," Bennett said.

"If build does not move forward and no-build becomes the preferred alternative, we will have to make a whole new set of plans for resiliency related to our connectivity between West and East Salem if there is a major disaster," he said.

At last year's State of the City, he said the project was "stalled." This year, the prospect of building the third bridge has become "increasingly unlikely," Bennett said.

Earlier live tweets suggested the misrepresentation might be worse, but it turned out mostly to be spin rather than falsehood.

The Mayor gave his annual State of the City speech today at noon. As represented in first-hand reporting, some of his statements about SRC appear so misleading that they merit some quick response.

To say that we need the SRC to be "resilient" is to misunderstand the opportunity cost: If we spend a billion dollars on a giant new bridge and highway, that's money we will not likely be spending on other valuable good things. Local taxes and funding sources would be necessary in addition to whatever State or Federal funding somehow materializes (and the official stance is that the SRC is a low priority for State or Federal funding). There would be debt that would affect the resiliency of local government, also. We already have a gap between revenues and budgets.

A "no build" Record of Decision almost certainly avoids the need to repay the Feds. There is a direct way out on that problem. "Could" is by implication doing a lot of fear-mongering here.

Finally, the SRC would harm bicycle connectivity throughout the whole city, induce more driving throughout, increase speeds, and in no way helps us "nurture" bicycling. The Mayor plainly does not know what he is talking about. The SRC is in most every way harmful for bicycling. The SRC would also suck up huge amounts of discretionary transportation spending and eliminate important funding sources for sidewalks, bike lanes, and crosswalks. (Update - See "Salem River Crossing Whopper: Bait and Switch for People who Bike," "Salem River Crossing Memo on Bike Connectivity Potentially Misleads Task Force," "Happy Pedestrians Show Absurdity on Proposed Third Bridge," and "SRC no help for People on Foot and on Bike" for more on how the SRC harms connectivity for those not traveling by car.)

If a transcript is published, or if the reporting on it goes more in depth, there may be more to say later.

But it looks like the Mayor is trying to bikewash the SRC, and people should not fall for it.

And the Original Update

In Salem Reporter's fuller version, the Mayor does misrepresent or misunderstand the geometric realities:


"As we create more congestion in downtown Salem by failing to deal with another river crossing, that kind of congestion creates problems trying to get bike lanes put in," he said. "It's just one of those kinds of issues. We have to do it. Where are we going to put them? Because it's just packed full."

In the middle of Winter, this month Seattle took out the Alaskan Way Viaduct.

Biking is up, and congestion no worse:


Three days into the first workweek without the Viaduct, the Times summed up the new commute as “some delays but no crises.” Five days in, traffic remained “average.” Suburban commuters barely noticed a change—except, perhaps, a slight easing of demand at park-and-rides. Even Seattle school bus drivers found that things went “better than expected.”

The Mayor and autoist apologists have a completely wrong-headed notion about a supposed hydraulic nature of traffic. We don't need larger pipes, and traffic is not a fixed quantity of fluid.

We'll come back to this because the problem here is not just trying to spin the SRC, but is the misunderstanding of traffic that has become "common sense" as well as traffic engineering dogma. Rooting out the errors of hydraulic autoism is a system problem, not merely contesting isolated facts or empirical observations.

Here's the worksheet Doug references in his comment below.

It is discussed on more detail here "Salem River Crossing Memo on Bike Connectivity Potentially Misleads Task Force." When it was written in 2012 it seemed prudent to say "potentially misleads." Six years later we can unequivocally say it was intended to mislead and to bias analysis in favor of the bridge.
Posted by Salem Breakfast on Bikes at 1:40 PM

Revised this substantially since yesterday.

The “evaluation” that Mike Jaffe of the MWVCOG and the consultants performed in July 2012 that concludes that bicycling would be improved by a 3rd bridge is little more than a back-of-the-envelope effort that focuses on quantity rather that quality and reaches the conclusion that there would be a benefit based simply on the fact that there would be a couple additional miles of bike lane on a new bridge. Jaffe, et. al., did not consider the detrimental effects of the bridge and the freeway style approaches. The bicycling representative on the Salem River Crossing Task Force — me — had absolutely no role or input into that evaluation.

That's important perspective from Doug. Added a clip of the "evaluation" he references.

Oh, no, you had a very large role in that evaluation.

Your role was to enable them to say that they had a bikey person on the committee.

(Of course, they would have preferred throughout the whole process if you had acted like Mike Pence at that early January meeting where Nancy Pelosi schooled Baby Donald and sat like a catatonic crash test dummy without measurable brain activity.)