Here's a signal local moment in the invention of jaywalking!

Portland's first jaywalking ordinance went into effect on January 10th, 1919.  It ratified an important shift in burden for safety from driver to walker.

The "order" of it all is contrasted strongly with disorder elsewhere:


Many pedestrians who had seen traffic conditions In Eastern and Middle West cities expressed approval of the adoption of "modern traffic laws" in Portland.

The rules for walking would be coupled with rules for car storage, interestingly:


When the public has been instructed thoroughly regarding that angle [on walking] the new parking laws will be gradually enforced.

There was also one or more safety films. Since movies were still fairly new, its making had earlier been on the front page.

From the review after the first showing:


Policemen and others were utilized to show how pedestrians should cross streets at right angles and be careful not to jaywalk and be careless in other ways destined to offer a fine target for the speeding motorist.

Note that "the speeding motorist" is not the principal careless one! The focus is on jaywalking, not jaydriving.

This not only shifts the burden for safety to those on foot, but absolves motoring road users of fault.

All in all this is a moment by cars and car users in the take-over of public space we call a road.

It doesn't seem that the films have been written about, but if anything comes up on them, there might be more to say. And, of course, any new jaywalking laws here in Salem will be of interest as we go through 1919.

And here's some excellent autoist propaganda about jaywalking from later that fall! 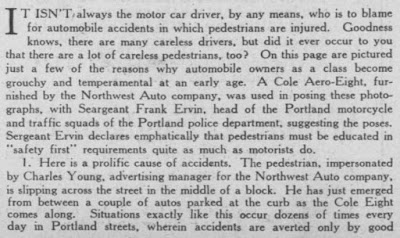 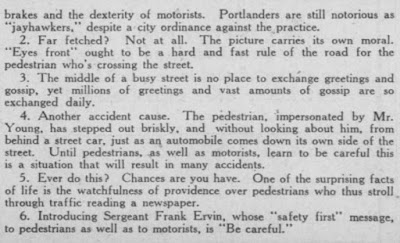 It isn't always the motor car driver, by any means, who is to blame for automobile accidents in which pedestrians are injured...did it ever occur to you that there are a lot of careless pedestrians, too? [here are] just a few of the reasons why automobile owners as a class become grouchy and temperamental at an early age.

Note that the "advertising manager for the Northwest Auto company" is "impersonating" the pedestrian in the photos!

Do you think that the usage of "impersonate" has shifted that much in a century? By modern usage this would be an easy tell, giving away that they were only pretending to care about the safety of those on foot, and really only caring to advance the interests of those using cars. But perhaps this makes that single word do too much work. Still, that one of the actors is from an auto agency underlines the main purpose here: "Auto accidents are not always the fault of the driver."

As autoists were motivated to seek greater immunity and "freedom," the invention and enforcement of jaywalking served their ideological, commercial, and legal interests.
Previously on jaywalking: