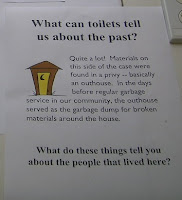 The debate on the SRC is heavy and heated, and maybe something trashy and low would be welcome.

Here are notes on some poopy things around Salem.

Did you make it by either the Mill or the Library for the temporary exhibits on the archeology digs at the new Police Station site?

The version at the Library was a little underwhelming, perhaps because it was still early in the assessment process. I was hoping for a little more narrative sweep and analysis, but it was mostly lots of things. Things with tags. A little bric-a-brac-y.

They found plenty of evidence for Kalapuya life, a hitherto unknown well, and lots of glass and ceramic, much of it apparently from one or more outhouses. It was nice to see the middens represent! Hopefully they'll present a more formal report later on. (Previously see: "Traces of Old Hotel at New Police Station Site? Archeology Day Offers Glimpse of Older Salem!")

Down the street, the gate was open on the crater on the corner of Chemeketa and Liberty, the former site of Pietro Belluschi's First National Bank. Inside the fencing was a small pond, and it was not so much shocking as it was depressing to see the callousness and disregard for the urban fabric at this important corner downtown.

It should be a bigger problem for the City that the site is not filled, that no new structure is being erected or planned. Even a friggin surface parking lot would be better than this pondy crater, soon to be a mosquito paradise. Maybe it needs more water and to be stocked with trout for urban fishing? (Previously: "Third Try's the Charm: Demolishing the Belluschi Bank," notes on the start of the demolition in "Belluschi Legacy in Danger: YWCA Building Deserves Attention," and an early view of the crater in "Eclipse and a Delightful Fullness in Downtown.")

Farther away, the sidewalk design on the new stretch between Hoyt and Fairview on 12th Street remains baffling. If you have to install railings like this, maybe the rain garden slalom was not good design in the first place. The spacing on the rain gardens and mail boxes means a real slalom, back and forth, zigging and zagging. It's not unwalkable, but it is in some way fundamentally hostile to pedestrians, people with mobility devices, or the blind. It says: You are second class. (Previously see: "12th Street Sidewalk Improvements Come into Focus" and "Kludgy Details on 12th Street at Fairview.")
Posted by Salem Breakfast on Bikes at 7:00 AM

The fencing around the 12th Street Rain Garden seems to be a lost opportunity for an art feature or a bench. There is definitely a lack of imagination in Salem planning. Maybe the Neighborhood Association with the local businesses can come up with something better.

I asked Deputy Chief Bellshaw if there would be a tribute to the Kalapuya Indians at the Police Station and he said, he thought there would be a sign at some point. How sad that such a civilization gets diluted to a sign.