The process to update the Comprehensive Plan has published the initial set of metrics they call "indicators," and it's a little surprising. 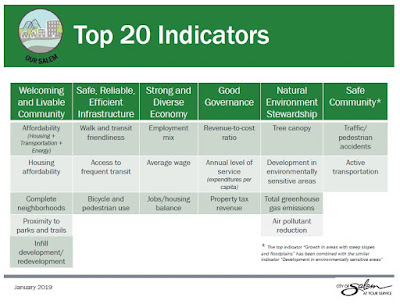 On FB, one advocate described them as "A BIG DEAL," putting "the environment and environmentally friendly transportation as the central issues to address as Salem grows":


Of the 20, six speak to non-auto transportation: complete neighborhoods, walk and transit friendliness, access to frequent transit, bicycle and pedestrian use, traffic/pedestrian accident, and active transportation.

Overall this is great to see.

But as always, it's what the City does, not what it says, that is important. We've been down this road before: Every time we have some shiny new and exciting policy language, somehow it is ground down to something much less innovative or transformative in action. Writing and adopting the language is not the primary thing to laud or criticize: It's the budgets and decisions that follow that are critical. Our current Comprehensive Plan has lots of juicy language we routinely ignore or interpret in the most generous of ways, we should remember.

Still, if we assume this new language will be effective, is it actually the right balance?

Right off I see overlap. I see three indicators that are likely redundant, already adequately covered by other metrics.
Without changing the priorities citizens have shared, there is room to broaden the metrics. On Safe Community, especially, it seems thin. Is there a good way to include metrics on crime and disaster recovery? There might not be, as the initial slate of candidate indicators was also thin.

Medical services did not make the cut, and natural disasters was folded into environmental stewardship. Response time was judged out of scope. (The asterisks did most of the work!)

Still, I do not find this very satisfactory, and I wonder if there needs to be another iteration on the selection of metrics for "Our Safe Community."

For "Welcoming and Livable," I wonder if we should include something on displacement. We will want to redevelop close-in neighborhoods and commercial corridors, and we should want to watch, assess, and potentially correct for unwanted consequences. And do we capture enough in the metrics about the disparities in life expectancy?

Additionally, as we think about making it easier to walk, bike, and bus, we should perhaps circle back to our older language about "decreasing reliance on the SOV." That exact language is clotted and unfortunate, but if we want to measure increases in walk/bike/bus, we should also want to measure the opposite, decreases in driving. Too often we talk about making something "attractive," as if the mere existence of options is enough. But what matters is how often the option is actually used, not how attractive it might be in theory. This is the great problem with bike lanes on busy streets, for example. We show the blue line on a map, congratulate ourselves on this connectivity, but that is itself no guarantee of its usefulness. To ensure that we have measurements for actually changing the transportation mix, we will want also to have a good proxy or metric for reducing drive-alone trips.

It seems to me that it is appropriate to look at that top 20 list now that it is published and to ask whether the overall shape is right. I am not sure that it is, and I think it may need some adjustment, not to the total sense of priorities, which seemed to be clear, and fairly arrived at through the public process, but because some of the proposed metrics overlap and the redundancy does not do justice to the real jumble and diversity and manifold nature of a city. A good city is richer and more various than this "top 20" list metrics would indicate.
Posted by Salem Breakfast on Bikes at 12:01 PM

I agree with all your points AND I think the metrics that scored high by a "stakeholders" group" and a public workshop is promising. We should draw hope for the future where we can rather than simply shrugging to off while recognizing it's the first step. From what I understand, all the metrics will be reported on, but the top ranking ones will be more prominently highlighted. Could we use some consolidation and addition, absolutely. Could this be ignored by staff in the future, yes. It's up to active citizens to hold city officials accountable.