The SRC's Disconnect on Decongestion Pricing

One of the memos for the Wednesday Council Work Session on the SRC that has been published is the "Salem River Crossing Revenue Projections." I don't remember seeing the final version of this memo published before.* 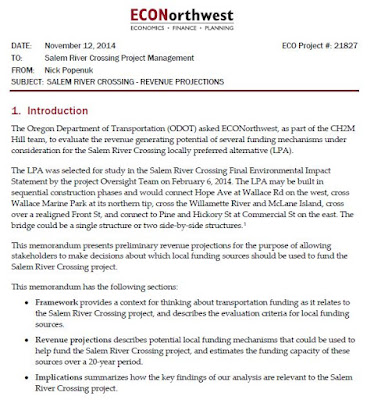 And here is what might be the single most important take-away. This chart isn't from the SRC. But it is drawn from the table just below, table 5 in this "Revenue Projections" memo. The table is from the SRC's own materials, and the data the chart expresses comes from the SRC's own internal assumptions.

As soon as we toll the bridges - poof! All our problems with congestion go away on the existing bridges.**

If we build a new bridge and toll it and the others, we will have speedy crossing on all three.  As soon as we toll, any new bridge becomes wholly superfluous. Tolling forces the question: Why do we also need a bridge?

We could think of tolling then as "decongestion pricing," as tolling looks to be highly effective with decongestant action. And if we use tolling not to fund a new bridge, but as a policy measure to manage demand better, even implemented with variable rates so that off-peak crossing is cheaper, then it is obvious to think of it as decongestion pricing.

Apart from the projections and congestion relief, the memo also clearly recommended tolling: "Tolls are the fairest option." 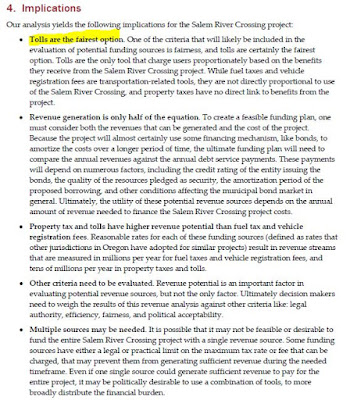 So: The SRC recommends tolling as fair, and the SRC shows tolling dramatically reduces congestion.

Decongestion pricing should be at the center of our analysis, not building a new bridge.

But decongestion pricing is largely erased from any analysis other than the context of funding. In particular, the traffic forecasts are uncoupled from any analysis of tolling. We can see this in the omnibus Q & A posted in the Work Session materials. (There will be much more to say about this Q & A!)

From those bullet points, the model forecasts a 5% or 13% increase in vehicles on the current bridges in 2040. But under all the scenarios of tolls more than $1.00, future traffic on the bridges is reduced below current levels, not increased. And even at the $1.00 level it obtains a clear reduction for 15 years. In any tolling scenario these vehicle counts are wildly off.

If the funding model asserts tolls are necessary, and they do, and as we see in Portland, tolling is going to be an increasingly important tool, the traffic modeling shown to policy-makers and the public is incoherent as long as it is disconnected from tolling.

And it is difficult to avoid the conclusion that it is disconnected from tolling in order to show decision-makers and the public the worst case, most congested scenario, and to drive home the supposed "necessity" for the SRC.

But if we are dispassionate about looking for the best solutions, we will give a lot more attention to decongestion pricing and we will want to include a larger range of scenarios in our traffic forecasting.***

* Here are comments on a draft version of the memo, and much of this discussion follows from that earlier piece. The memo seemed to disappear after that draft appeared briefly, never leading to a final version. This might have been by design, since bridge apologists generally tried to deny that tolls were recommended as part of the funding plan. The memo is clear about recommending tolls. I do not now see the memo as part of the LUBA record and land use decisions process, and it is not part of the materials published for the December 2014 Oversight Team meeting. It seems safe to conclude that it was "buried" in the colloquial sense, and it is very possible it was intentionally not shared at all. Regardless, it is helpful to see it now.

** CityObservatory had a series of relevant posts on a new bridge for congestion relief in Louisville (here, here, here):


the principal objective of the Ohio River Bridges Project...was to reduce traffic congestion....The data and the traffic cam photos suggest that Louisville has demonstrated a powerful, fast-acting solution for reducing traffic congestion: charge a toll. It’s too bad they found out only after spending in excess of a billion dollars building new road capacity that apparently wasn’t needed or valued by those who travel across the Ohio River each day. Maybe other cities can learn from the Louisville’s expensive experiment.

*** There will be more to say about the forecasting and modeling in a future note. Broadly, there are many sources of uncertainty on all of the forecasts. Any statistical forecast should come with indications of the margin of error and confidence interval. These normal elements of forecasting have been suppressed on the SRC, seemingly in order to bias outcomes and give policy-makers false confidence in decisions.
Posted by Salem Breakfast on Bikes at 12:30 PM