SRC Cost Estimate and 40% Contingency Nearly Certain to be Inadequate 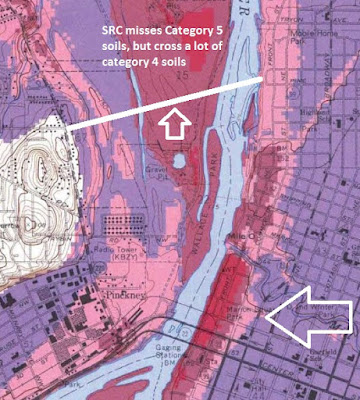 On questions about earthquake and seismic resilience, the Q & A makes what looks a little bit like a move for false equivalence. They are shading matters so they don't have to face the question squarely.

In Section 20.c of the Q & A they write (and Category 5 is most hazardous, Category 1 the least) that
This makes the current bridge locations look worse, right? Category 5 is worse than Category 4. Of course we should build the SRC on those more stable soils!

But when you look at the map - and it is significant the Q & A omits the map and merely references one in a different and hard to find document - the whole flood plain across which the SRC would cross is Category 4. The map is dated 1996, and since then there has been a great amount of gravel quarrying and there may be an additional factor of industrial disturbance to increase these soils' propensity to liquefaction. (It would be interesting too if there is any updated version of the map.) In any case, if distance or area is at all a factor in multiplying odds of an event or multiplying the severity of an event, the larger extent of Category 4 soils make the Preferred Alternative meaningfully more risky than the current bridge crossing sites.

Still, it is true that downtown along Water and Front Streets, extending even to edge of Commercial Street, there is a band of Category 4/5 soils. It may be that the current bridge sites are not as stable as we had thought they might be.

So here it may not be possible to consider things a slam dunk any more. Maybe it's a little more ambiguous than that.

But it does not seem like a stretch to say that the SRC is still in a high risk area, and that reinforcing the current bridges still is a better bet - not a certainty, but is a better probability - than building a new bridge at the current Preferred Alternative's location.

If you were placing a sports bet - think about that big football game next week - which would you choose?

Would you bet on the Preferred Alternative? Or would you bet on reinforcing the existing bridges? Betting on the SRC here seems like it is easily the longer-shot and that the odds on the current crossing locations are better.

The "Findings" in the Geological Resources Technical Report Addendum from Sept 2016 should not inspire confidence. It is a tissue of weasel words and hardly constitutes an actual finding. Clearly they are concerned and warning about difficulties discovered during construction, and have written a very evasive and "CYA" conclusion. Even in the final bullet, which presumes "proper geotechnical investigations...proper engineering design" and "mitigation measures," they still can't bring themselves to use a positive verb of certainty or confidence, and hide behind "could." There's a lot of risk and uncertainty hiding in plain sight.

So what about the budget? The Q & A asserts that a 40% contingency will be plenty to cover all the uncertainty expressed in Section 5.3 of the Geological Resources Technical Report Addendum.

It happens that economist and Editor of City Observatory, Joe Cortright, has compiled a list of large projects ODOT managed and their overruns.

The one with the most unstable soils, the Pioneer Mountain Eddyville project, was announced at $110 million, and came in over $366 million. But even without unstable soils, large projects at ODOT usually require much more than 40% contingency.


No matter how tightly SRC advocates vet a cost estimate with unit pricing, and in the materials for the Work Session there is a giant spreadsheet for your consideration, the framework itself for estimating is broken and misleading. It is by design structured to underestimate costs by a very large margin. It even admits that "the planning level estimate does not specifically site-specific factors, such as contaminated soils, archeological considerations, geological conditions, or geotechnical variations..." The estimate is a SWAG, and there is no evidence to suggest a 40% contingency sufficient to cover for it.

And look! Here's a fresh and local example, just a few months old. This fall the Oregon Transportation Commission had to double the budget for the I-5 Woodburn to Salem paving project. Not all of the doubling is cost escalation; some of it is moving budget from one phase to another, if I recall right. Nevertheless, this is just routine maintenance, not major new construction, and they still are going over budget. At least a third of it is unambiguous "increased roadway construction costs." Here's the summary from SKATS: 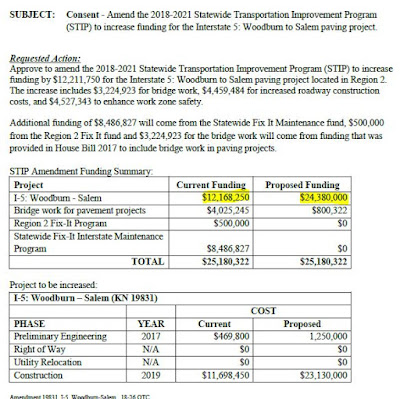 Big projects, measured in tens of millions, at ODOT often come in over budget. Very big projects of hundreds of millions never come in near budget.

(Previously see "ODOT's Careless Approach on US20 Project Echoes in Geology Report for SRC.")
Posted by Salem Breakfast on Bikes at 12:01 PM

May I respectfully recommend that before you go on any more about this, that perhaps you get an informed opinion from a geological engineer or a bridge engineer. FWIW, I know the design engineer responsible for the vastly overpriced Minto Island bridge has recently retired, so he would likely be objective.

(You're kinda just trolling, you know?)

If you read Section 5.3 on "Findings" from the 2016 technical addendum cited above, you'd see there was plenty of opportunity for a more positive assessment of risk and certainty from experts. But it's full of weaselly equivocation. The authors and experts they relied on totally evaded a direct statement.

We are asked to evaluate the DEIS, which is supposed to be a full accounting and analysis of the project, and to evaluate this Q & A as it was published. Supplemental assessment, multiple rounds of clarification, and the regressing loop that implies, should not be necessary. The published docs should contain enough information so that non-experts, like those on Council, can make an independent judgement. But gaps, omissions, and elisions in the documents warrant the reading offered here. ODOT's terrible record on large projects supports this reading. Research on megaprojects worldwide suggests skepticism is warranted, also. Many different strands of evidence suggest this is a likely reading.

You are welcome to share this post with your retired OBEC friend, and if he wishes to comment on and contest the points here he is welcome to do so. He should be willing to sign his comment as expert opinion, however. OBEC still might hope for contracts from the City, and even retired your friend may not be as independent as you think. Still, if a bridge expert wanted to weigh in, he might have useful contributions. Heck, he might even have so much to say that his comment would deserve to be guest post, and have post space all to himself!

Hinessight has a post on the gravel quarry and excavation on the west side. Apparently the soil depths and elevations used in the cost estimate are from 2009, and do not reflect about a decade's worth of gravel removal, accelerated in recent years.

With the Rose Quarter - I-5 project in the news this week at the OTC, it is interesting that that project shows signs of being wildly underestimated.