Will the Scooter Wars Play out Here in Salem?

You might remember a piece from last summer about "the scooter wars." 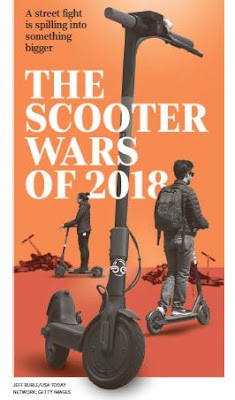 On balance more choices for micro-mobility would be a good thing.

But there are some real questions about scooters, and they show some of the gaps created and enforced by our autoism.

Even on a quiet street like Saginaw, I have seen adults on the sidewalk from time to time.

We don't have a complete network of bike lanes here in Salem, and to expect people who ride scooters to stick to the bike lanes is patently unrealistic.

Like with the rental bikes, rental scooters may add pressure for updating our downtown streets.

But we should go ahead and add them to the mix here. I see more kids on scooters than kids on bikes these days. At the moment, scooters seem to be the popular thing, and it will be increasingly difficult to exclude them.

And they are better for us than the TNCs, for whose introduction the Mayor was so eager, and which a recent study suggests "leads to approximately 83.5% more VMT than would have been driven had ride-hailing not existed." The TNCs cause rather than relieve congestion.

Maybe wrangling the scooters for charging and maintenance also adds VMT, but that's one car trip for multiple scooter trips, so it is at the very least a diluted effect, and may zero out altogether or even be negative.

Additionally helmet requirements and difficulty enforcing them may also prompt more discussion about our wildly inconsistent standards for helmets and the ways we use them to marginalize other road users. Through helmet laws and helmet marketing, we frame biking as "unsafe" and talk about "bicycle safety" as if the burden should fall mainly on bike users, but it's the cars that do the killing and maiming, and more car users sustain head injuries than bike users.

It may be that we will be stuck in the autoist divide-and-conquer move where we all fight over the scarce sidewalk space. Walkers have reasons too often to be annoyed with scooter users.

BikePortland mentions the prospect of Legislators seeing and using them, but with the Capitol between State and Court, most riding will be on sidewalks, not in any bike lanes, and they may be more annoying or chaotic than helpful.

In the end, the root of the problem is our autoist system, which induces or exacerbates bad behavior by those who reasonably want to avoid zooming cars.
Posted by Salem Breakfast on Bikes at 7:00 PM

Email ThisBlogThis!Share to TwitterShare to FacebookShare to Pinterest
Labels: Scooters