At the MPO: SKATS Still Weighing the Evaluation Criteria for 2019 RTSP Project List

The Policy Committee for our local Metropolitan Planning Organization meets tomorrow on Tuesday the 22nd. There's no important immediate decision on the agenda, but lots percolating on the total transportation funding system.

There is an update on the SRC and the Council Work Session later this month:


The city of Salem has scheduled a work session on January 30th at 6:00 p.m. for the Salem City Council to discuss the Salem River Crossing project. SKATS assisted city of Salem staff prepare a “Salem River Crossing Project - Question & Answers” report to the council. The draft report has over 130 questions divided into 22 different categories. Staff will e-mail the city’s report to the SKATS Policy Committee when it is completed.

Presumably the City will publish the document as part of the Staff Report for the Work Session, and it will be very interesting to read. Probably it will have a bias for the SRC, and it will be necessary to read it closely and perhaps even to interrogate or "fisk" it.

In the formal Work Program, the SRC is a little mysteriously omitted. I don't know how important that is, as the present document is a draft only and is not complete, but it's always interesting to read (and in this case not read) what is the MPO's formal position on it.


Evaluation and Scoring Framework for the RTSP

In the minutes from the last meeting, there was a short bit on the contested Goal 7 on greenhouse gases:


Referencing RTSP Goal 7, Mayor Gary Tiffin asked about the status of the goal. Mr. Jackson responded that evaluation criteria will be developed for Goal 7 once the language for that goal is completed. He added that the impact of the criteria for a single goal is unlikely to have a huge impact on project selection as it would be scored either a zero or 1 point.

It is significant that the "evaluation criteria" are constructed in a way to minimize the effectiveness of a strong Goal 7. That is, the criteria are so thoroughly autoist in total concept and system, changing the language in one goal cannot alter the total balance. It is going to take more work and a rethinking of the whole suite of goals in the RTSP (and elsewhere) to adjust for an actually balanced system that offers meaningful transportation choice. The Staff Report on the latest discussion of the criteria finds that "projects that score well in one option tend to score well in the other options."
One way to read this is that the scoring system is working well and that it is generally landing on the right ranking of projects. Another way to read this is that there is a system bias and the repeated sameness in scoring is evidence for confirmation bias, and that we would be better served by a more thorough critique and revision of the evaluation process. If there's little or no variation, what are we testing?

Here's the rankings for "unfunded" projects (ignore the right-hand column, which is the continuation from the bottom of the first column), and the SRC is at the top every time.

If we were to give real weight to greenhouse gas emissions, for example, it is nearly certain we would find the total mix of projects would look rather different. On Safety, we might ask, "safety for whom?" The SRC does not add safety for people who walk and bike, and the increased speeds it would prompt likely degrade safety also. If the SRC sucks discretionary funding from other projects, how is it the top ranked project for "good repair"? Something is amiss here, and it looks like the scoring is biased towards pre-determined outcomes.

The City should still insist on robust language for Goal 7 in this 2019 version of the RTSP. But this is only a way station, a small and temporary moment, in the larger movement for rethinking our total approach to transportation and land use in light of the crisis of our greenhouse gas emissions.

In the discussion of the evaluation framework, there's a bit on total funding. On the one hand, there are numbers, and it looks real; but on the other hand, projecting out to 2043 is silly and unrealistic. Still, in a holistic way, it shows the scope of funding. 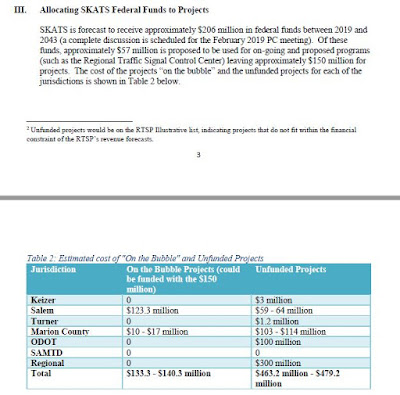 If we commit to the SRC, that $150 million gets nearly all sucked up by the one project. Note the $300 million "regional" project under "unfunded." This is huge opportunity cost with the SRC that is not sufficiently talked about. If we commit to that giant project, hundreds of smaller projects like sidewalks, bike lanes, and crosswalks won't get funded.

The table also shows problems with the governance structure of the MPO. Each entity represented by a line in the table gets one seat and one vote on the MPO's Policy Committee. The City of Salem has almost all of the projects "on the bubble." The governance structure hugely dilutes the City's vote and creates an institutional bias for rural and non-urban interests. As it is, the Staff Report amiably suggests


One option is to use the federal funds to first include the Turner project, as they have only one project and for equity should receive some funding over the next 20 years. Then, the projects for Marion County and Salem that are “on the bubble” would be funded, with the remaining revenue to fund the two Keizer projects that cost about $3 million. The other projects that are currently designated as unfunded would be placed on the Illustrative list.

But still, this is something that Salem should want to have more control over.

The full meeting packet and agenda can be downloaded here.

This regular Meeting of the SKATS Policy Committee meets Tuesday the 22th at noon. SKATS is at 100 High St. SE, Suite 200, above Table Five 08.
Posted by Salem Breakfast on Bikes at 12:01 PM

Thanks for this good reporting and analysis. Re: funding for the SRC, the reality is and always has been that there is no way to fund it without tolling all bridges, old and new. But the politicos on SKATS don't want to be honest with their constituents about this. I predict that the SRC will finally die on a 6-3 vote of the Salem City Council in another month or so. Then we can put a fork in it and move on.

And thanks for the new word 'fisk.' It doesn't need quotation marks. For those who didn't look it up, like I did, it means "To criticize and refute (a published article or argument), especially in point-by-point or line-by-line fashion on a blog." Origin of fisk: "After Robert Fisk (born 1946), British journalist, some of whose controversial reports on the Middle East were criticized on blogs."