Now let's look at how the SRC Q & A tackles greenhouse gas emissions. 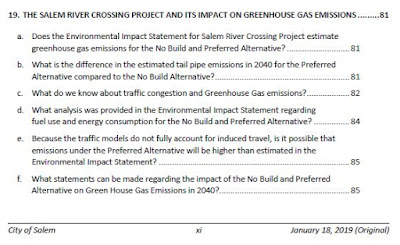 What are the problems with this?

False precision is a central problem. Look at that decimal point! Not just 13 mph and 22 mph, but 13.1 and 21.9. Same with the forecasted VMT in table 17. This is a major system problem in the whole forecasting enterprise. What is the 95% confidence interval? What are the error bars? It is very difficult to know what the actual range of effects might be.

Fleet Conversion. Another source of uncertainty on the greenhouse gases is the proportion of the total transportation fleet that has electrified by 2040.

As I read it, the analysis of tailpipe CO2 and other emissions here assumes no change in electrification.

But if the fleet is substantially electrified by 2040, then CO2 comes from electricity generation, not from tailpipe emissions, and in that case,there is no benefit in preferring an average speed of 21.9 mph to 13.1 mph.

Additionally, if electricity generation and not tailpipe is the source of emissions in 2040, then we would prefer the alternative with the lowest total VMT, which in this case is the No Build.

Fleet conversion, and the rate this happens, has a material effect on greenhouse gas emissions in 2040.

Dependency on a single study from 2009 is a problem. This is an example where the Q & A's admission that "the references may not be the seminal work or the latest on the topic" likely has real costs. It seems very unlikely that this study, now a decade old, meets a standard of "best available information." It is almost certain that the Q & A's confidence that the SRC is best for reducing greenhouse gas emissions is misplaced. This is very much a topic on which we all should insist on the best available information.

As it happens, newer information from California suggests that neither fleet conversion nor improved tailpipe efficiency will be sufficient. "2018 Progress Report on California’s Sustainable Communities and Climate Protection Act," notes


Even if the share of new car sales that are ZEVs grows nearly 10-fold from today, California would still need to reduce VMT per capita 25 percent to achieve the necessary reductions for 2030.

We have to drive less often and drive fewer miles. Any plan that fails to face this squarely will be a sham. SRC claims that we can drive more, drive faster, and still meet greenhouse gas goals, is bogus. Adopted plans must support VMT reductions.

But there are also other sources of uncertainty that are generally glossed over.

On "Energy Consumption," in an attempt to soften the conclusion, they revised to say they have no idea. "The 16 percent increase should be considered preliminary." It's hard to know whether this is offered in good faith or if it is a "merchants of doubt" move. As we learn more about the greenhouse gas emissions from concrete, it seems likely to be worse. It is hard to envision a situation that involves big construction project + more VMT = less total energy use. On the face of it, this equation seems very dubious.

But if these SRC principals are willing to question that 16% claim in the DEIS, it is evidence then that critics of the SRC are right to doubt and question other parts of the DEIS.

If we take this revision at face value, they don't know and they want Council to make a big, billion-dollar decision as if we did know.

Induced demand is also a source.

For the moment it is sufficient to note that this is a very large source of uncertainty.   "Whether the 15% factor results in an underestimation or overestimation of traffic owning to latent demand is not known."

Tolling is a huge source of uncertainty. If we toll the bridges, average speeds will rise, eliminating the problem of engine inefficiency or idling. VMT reductions will also reduce emissions. Only by pretending we won't toll can the Q & A suggest that the SRC is best for greenhouse gases.

If we need to reduce greenhouse gases drastically, an incremental reduction in tailpipe emissions will not be enough. We need to drive less, not drive more and drive faster.

Path dependency is an issue. If we build a giant new bridge and highway, it will be more difficult to reduce driving holistically after the bridge is constructed. If drive-alone trips are less costly in general, transit will seem more unattractive, for example. The more auto capacity we build, the more future reductions we will need to make, and the harder they will be.

If on the other hand, we don't build the bridge, it will be easier to focus more on transit and other non-auto mobility.

If we think less driving will be necessary, we should not be building things for more driving.

The advantage of congestion is that people then begin to think about alternative actions. That could include traveling by alternative means or perhaps not traveling at all. Unless the SRC study were to include the estimation of what will be the emissions AFTER Salem have taken all the recommendations of the Task Force on Downtown Congestion, it is just speculation on what might happen with a bridge IMHO.

Also, should we not be considering all the ways that GHG are emitted into our air shed instead of just vehicles?

What businesses in the area also contribute? Would reducing those emissions make sense in the overall health of the area?

Part of the problem with calculating real time air quality is that Salem doesn't actually test the air. They just use calculations derived by some formula. I'd like to see some actual air monitoring done before a decision is made. Perhaps we could test the air during peak hours verses late night, or off-peak hours.

And the other thing I would like to see is a comparison with places like South Commercial and Keubler Blvd or on Lancaster Drive.

I like your assessment of the situation....truth is we really do not know if the GHG would be reduced with a bridge.

As an aside I am very concerned about GHG production by any source. How about looking at the fact that we have the 19th highest producer of GHG right in our midst with the Covanta incinerator? It produces as much GHG as more than 30,000 vehicles!