There's a flurry of memos published in advance of the Wednesday Council Work Session and Showdown on the Salem River Crossing. It'll take some time to work through them all, and multiple people will take passes at the material. Rather than first trying to write any kind of overview, here we'll go at it in bits and pieces and will early next week in a summary post try to give shape to the material, bring it together, and engage interesting analysis and comment from others.

We'll start with an easy bit.

One of the memos is the soothingly titled "A Mission Street Retrospective." It's a cheery stroll down memory lane on the planning process for the Mission Street overpass between 12th and 17th Streets. 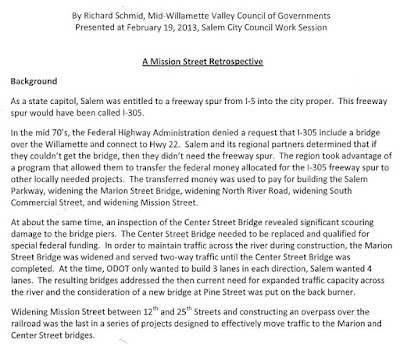 You can read more on it, including a transcription, in a previous note on its "establishment history." The retrospective makes no real attempt to engage the disruption created by ramp spaghetti. Because the neighborhood was having some trouble, it justified disruption by saying "it's already bad, so no big deal." It uses "slum clearance" as rationale:


Many of the buildings had been neglected and in a state of disrepair. Less than 8% of the structures surveyed showed evidence that the owners were maintaining them.

Houses were demolished or moved. Blank spaces and walls created a fissure between two neighborhoods. And the "improvements" for people who walk and bike are uninviting, and work mainly in theory as lines on a map. They are not very good in practice. They fail a "family-friendly" or "all ages and abilities" test. You would not send a child on them alone. The Mission Street overpass may have been good for "moving traffic," but it had many other ancillary costs that we do not adequately reckon with. When we privilege "moving traffic" through a place, we systematically erase the place itself and the values of people for whom it is a place. Limited by its hydraulic autoism, the retrospective centers "moving traffic" at the expense of everything else.

The term that applies here is "sacrifice zone." It's very sad. And this is what the 3rd Bridge would do to the neighborhood at the west end of Pine and Hickory Streets that is starting to see some new life. It would become another sacrifice zone. The report that the City produced for the work session states that a total of 108 residences and businesses would be "displaced" by the Salem River Crossing project on both sides of the river. That's a big sacrifice.