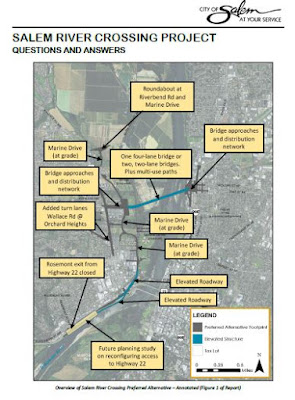 The Q & A for the SRC Council Work Session is a funny thing. It's supposed to be neutral and even-handed, but it is not.

In the introduction they admit "some of the references may not be the seminal work or the latest on the topic."

Why doesn't this Q & A represent the best state of the research on a given topic? This is a strange thing to admit from the start - unless that's an indirect admission that the document is already biased.

From here, based on the section on Induced Demand, it has looked like apologetics for the bridge, and not a neutral analysis. So omitting "seminal work" could be consistent with a pro-bridge bias.

But more than this, they say "providing in a single document all the information necessary...is a daunting undertaking."

But isn't "providing all the information" what the draft Environmental Impact Statement was supposed to do?

It is possible to read this also as an admission that the DEIS wasn't written to do what it was supposed to do, but was a biased document with a rigged process.

These admissions or concessions in the introduction sound humble and inviting, but they might instead be signs of deeper rot, an indictment of the whole preceding SRC process.

You might recall the anger of citizens in the fall of 2016 when the City dumped massive numbers of documents on very short notice, and then made the land use decisions also in a very compressed time frame with little actual debate in December. Even the professionals at DLCD commented on the lack of notice.

Two of the authors of the Q & A are principals in the SRC process. They should know it better than anyone. For them to say now that writing the Q & A was "a daunting undertaking" completely justifies citizens who claimed the land use process in 2016 was an egregious violation of State Planning Goal 1 for Citizen Involvement. For if these experts with an intimate knowledge of the SRC find writing this analysis "daunting," how the hell were citizens supposed feel?

That looks like an indirect admission that the SRC process has been structured to be opaque, hostile to citizen involvement, and rigged for a pre-determined outcome.

Finally, if the SRC was an unambiguously great or necessary project, writing a Q & A would not be so difficult. It would be straight-forward. That the Q & A is so tricky suggests the scope of real questions and uncertainty about the SRC. It's a sign that the case for it is weak, not strong.
Posted by Salem Breakfast on Bikes at 9:00 AM