You might have seen the Bloomberg Business "Welcome to Tax Breaklandia" headline circulating the last couple of days.


Among a nationwide patchwork of struggling areas, there are a small number of thriving communities that may draw an outsize share of investors’ cash. In some cases, the law may boost returns on investments that would’ve happened anyway....

Portland’s zones are so atypical that Barry Sternlicht, the real estate investor and founder of the Starwood hotel chain, used the city as a punchline when he criticized Congress for passing the tax breaks. “That’s not a blighted district,” he scoffed...

Locally there hasn't been much talk about Salem's zones. A couple months back on FB there was a little bit of talk about how the entire downtown area was eligible, but nothing in detail, and nothing about our other zones.

It turns out we have at least four of them:
Business Oregon describes them...


Opportunity Zones can deliver significant tax savings on medium- to long-term investments in economically disadvantaged communities. This new tax incentive pertains to both the capital gains invested initially through a qualified opportunity fund, as well as capital gains earned for the investor from businesses or projects in a zone.

Each zone consists of an entire census tract, as established for the decennial U.S. Census. Tracts vary in size but generally align with population density. Oregon has 834 census tracts, more than 300 of which were eligible by meeting the definition of a "low income community" in terms of median family incomes or poverty rates. Oregon could nominate up to 86 zones, as each state was allowed up to 25% of its low income communities for designation.

The designations are in effect until December 31, 2028, and offer a predictable basis for private investment decisions over several years. Current federal law provides no means to change or add zones. As such, Oregon's nomination process entailed thorough analysis of all relevant census tracts for their potential and usefulness, as well as extensive outreach to the general public, federally recognized Indian Tribes, local governments, and other parties over a 3-month period. Aside from the opportunity zone nomination process, state government does not have an ongoing, official role under federal law. Nevertheless, Business Oregon is exploring ways to partner with others in furthering the use of zones for the benefit of Oregon communities.

But the area in Salem that appears to have the highest "poverty density" does not seem to be included in any of the opportunity zones.

Other low income areas do seem to correspond to the zones. The zones may not correspond to that deepest green in North Salem, both downtown and the Edgewater district are in lime green on this map of "very low income" areas from the SRC process.

These areas also correspond to our existing Urban Renewal Zones. The West Salem, Riverfront-Downtown, McGilchrist, and Fairview zones appear to overlap nearly completely with the Opportunity Zones. (But again, the North Gateway area was excluded.)

Maybe the most interesting questions are these:
The Opportunity Zone program is a little funny, does not seem like it is targeted precisely enough, and may induce boondoggularity. (Maybe one of our business reporters will take a deeper dive into the program.)

As Council and the City assess the budget and priorities in the Strategic Plan, they should give more thought to our system of subsidies and whether it actually delivers what we want. Consistently our "Economic Development" Reports to Council are thin on detail and assume optimism and fluff.* We rarely circle back and ask in a disciplined way, "Did it work out right? Did we get what we wanted?" 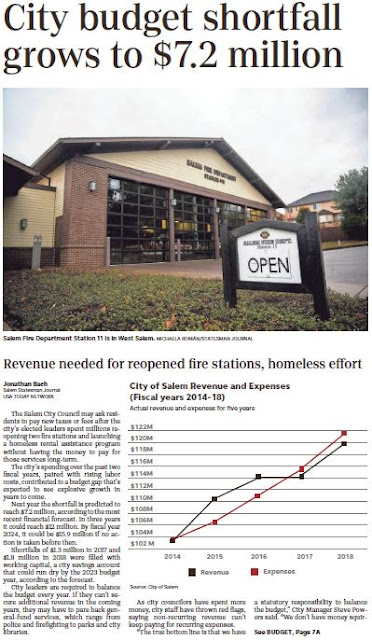 
URA grants continue to encourage private investment in development and redevelopment for the benefit of the community. During the quarter, the Riverfront-Downtown URA issued seven grants with a total City commitment of $448,537 and total project costs expected to be $1.4 million.

For the West Salem URA, construction of three buildings continued at the corner of Glen Creek Rd NW and Wallace Rd NW with an anticipated grand opening date of spring 2019. Additionally, a $167,000 grant was issued to West Salem Machinery for new manufacturing equipment valued at $860,000 and adding four new jobs. A $300,000 grant was issued to NWRA West for the construction of a new healthcare facility valued at $3.4 million and adding 26 new jobs.

A couple of days ago The Oregonian reported that the sweetener is even more cloying with an intentional double-dip!

"Though the opportunity zone program is national, Oregon will feel the tax impact thanks to the state’s own tax code. It automatically mirrors the federal one, so Oregon is effectively offering the same discount a second time on Oregon tax bills."

(Probably also should have been clearer in discussing that the Opportunity Zones involve capital gains, and the tax increment from Urban Renewal Zones involves property taxes. Urban Renewal funds often get cycled back to projects in the forms of grants or loans. A developer could get a subsidy with a grant funded by Urban Renewal monies; and then get two additional layers of subsidy later with the capital gains breaks, one from the State, and one from the Feds. That's some City-State-Federal layer cake of subsidy!)

The story goes on to talk about what I think is the "Holman Hotel" concept for the Marion Car Park site:

"Sturgeon, whose other company, TMT Development, most recently completed the downtown Park Avenue West Tower, is recruiting opportunity zone investors for a $285 million mixed-use tower on one of three sites in central Portland, as well as the renovation of a $43 million downtown Salem hotel."