Council meets on Wednesday for a Work Session on goals and policy.

There's a ton of material, and at a glance it looks like rather than letting values drive decisions, the Staff Reports are designed to have too much detail and to slow-walk decisions. There's something weird about all the stuff and clutter. It's like "are you sure you want to do this?"

Maybe this misunderstand things. At the very least, it's a reminder of the vast amount of material we ask Councilors to understand, and a reminder of the time it requires for that understanding.  To exercise real oversight and not merely to "rubber-stamp" staff recommendations is a lot of work.

One of the reports is on the 17 recommended actions arising out of the Congestion Relief Task Force.

Though they are "not in priority order," at the head of the list is Marine Drive. And it is interesting that one of the "future steps" on it is an amendment to the Urban Growth Boundary.

You might remember from back in 2016 a discussion of some of the Administrative Rules that would govern Marine Drive:


660-012-0065
Transportation Improvements on Rural Lands
(3) The following transportation improvements are consistent with Goals 3, 4, 11, and 14 subject to the requirements of this rule:
[...]
(g) New access roads and collectors within a built or committed exception area, or in other areas where the function of the road is to reduce local access to or local traffic on a state highway. These roads shall be limited to two travel lanes. Private access and intersections shall be limited to rural needs or to provide adequate emergency access.
(h) Bikeways, footpaths and recreation trails not otherwise allowed as a modification or part of an existing road;
(i) Park and ride lots; [italics added]

A collector-level Marine Drive for local traffic would not necessarily require an amendment to the Urban Growth Boundary.

A UGB amendment is necessary if Marine Drive is envisioned as an arterial-sized urban highway.

(The current TSP published on the City's website is dated February 2016 in one place, and February 2017 in another. Since LUBA remanded things, and the SRC had a bunch of TSP amendments, it is unclear whether the City reverted to the version of the TSP prior to the remand, and therefore what is the version of the TSP that is in force. But I think it is true that the original vision for Marine Drive was this "collector" level street. It's also true that Marine Drive scored low in back in July, and it's a little mysterious why it has so much momentum behind it.)

Slipping in the UGB amendment is a kind of detail that makes it look like the relation between values and detail might be inverted. 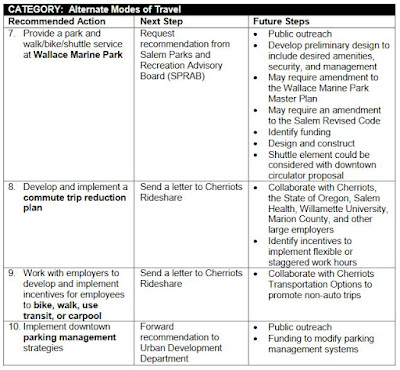 In the category on "alternate modes," there's another instance of clutter and detail. At least in concept, working on the idea of a "Park and Ride" in Wallace Marine Park is simple, but here the future steps are long and complicated, including possible changes to the Wallace Marine Park Master Plan as well as to Salem Revised Code.

A couple of them call for "send[ing] a letter to Cherriots Rideshare." Expanding trip reduction programming will probably require funding from SKATS, and that step may also require City Council's representative on SKATS to advocate more skillfully for additional funding at the MPO. This may require not funding road expansion activity - there are likely trade-offs, and too often we evade the notion that if we invest more in non-auto mobility, we will invest less in auto mobility. Expanding these is not just up to Cherriots and something easy to do with "more collaboration." It likely requires changing regional funding allocations, and the Staff Report should be more direct about this.

I continue to think that even though the politics are uphill, at the center of things should be parking reform. So many of the other actions follow more easily and naturally once we have right-priced parking and no longer require parking minimums on new projects.

There's a compilation of our "complete streets" policy language, but I don't exactly understand what it's doing. From here, the matter has rarely been what we say, but is usually what we do. We have lots of juicy "complete streets" language! The problem is that its clear intent is too often ignored.


Nevertheless, in the round of TSP amendments associated with the SRC - which may not have been touched by the LUBA remand, or maybe they are invalid now - there is an instance of taking the juice out of some policy.

Up until a few years ago we were supposed to "pursue" "demand management measures, enhanced transit service, and provision for bicycle and pedestrian facilities...as a first choice for accommodating travel demand and relieving congestion."

Now apparently we are merely asked to "evaluate" these things. This is a direct instance of ignoring or softening intent.

I believe this is a response to the bad faith and skullduggery in the SRC planning process. It retcons compliance with the TSP! Critics pointed out that the City was called to "pursue" these measures, and the City here indirectly admitted that they had no interest in actually "pursuing" them.*

So here's something that might be useful for Our Salem to do, especially in light of greenhouse gas emissions: Revert and/or strengthen the language about non-auto transportation in the TSP! And when there are trade-offs, stop privileging auto capacity and auto Levels of Service, and start prioritizing non-auto capacity and levels of service. (The State Street Study, and the politics of the "hybrid" alternative, is an example of this kind of failure. Of course the whole SRC also.)

In any event, the document might be a handy extract of relevant policies to keep on hand, much shorter than the whole of the TSP.

There's a very small item in the summary Staff Report, but no separate detail memo, on "Traffic Impact Studies for Small Subdivisions." It's hard to say whether this is mainly a response to NIMBY kinds of criticism and protest or is something else. It's punted to Our Salem, so maybe there will be more to say later.

In the Library report, the business jargon is strange and, especially given the Brutalist architecture of the building, there is an interesting, even totalitarian and culty, emphasis on the "One Library." It sounds like the Central Committee has a Five Year Plan! More seriously, this is more evidence for a radical new vision at the Library that's not been vetted enough publicly. Libraries have always seemed to be an important site for multiplicity and diversity, and the monolithic stress of "One Library" is a little troubling.


The first phase of work is continuing to drive forward initiatives that had been underway for months or even years including the seismic retrofit, creating and vetting a public-facing Collection Development Policy, and comparing where we have been to where we should be going with a market study paralleling a market study done in 2012. We’ve recently started to move into a new phase, particularly with the Collection Development Policy that includes the work to administer and implement the policy and bring the collections up to the standards the policy sets out.

Most important in both phases is exploring ideas to expand our reach while retaining our core users in response to the market study. This includes projects like the consolidated desk and meeting people where they are with roaming reference. This initiative to use our constraints as a launching point for creative solutions was first explored a few years ago, but expanded and explored now with staff-led teams. With this work the aim is to be more collaborative and build efficiencies with the idea of serving our community as one Library....

Centralization to increase efficiency and build capacity is a big part of our push to become “One Library.”

In the meeting materials there are also bits on:
* See "The Mostly-Ignored High Level Consensus to Reduce Drive-alone Trips," "Two Interpretive Questions: Goal 1 for Part or Whole? What does Implement Mean?," "ODOT Memo on Highway Plan Policy 1G seems Shallow," and especially "The Origin of the 8% Reduction is a Rhetorical Sleight of Hand!"
Posted by Salem Breakfast on Bikes at 12:01 PM

Something so important as City Council goals that will be directing the work of staff over the next year has had way too little participation and understanding by the citizens who pay for the work.

My comments to the City Council on the whole section on transportation was that in general it is the top priority of citizens and yet the least understood as to how decisions are made. They need to do much more community outreach to help the community understand what is happening....or too often, not happening before they consider any bonds for infrastructure.

I thought the whole section on Key Performance Indicators was gobbledegook!