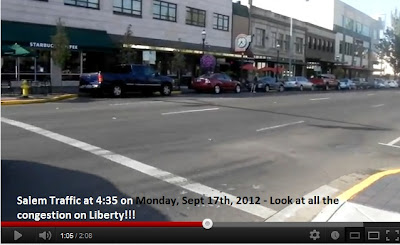 Over at the facebook, Lee's starting a crowd-sourced project to document downtown traffic volumes! Here's the first installment, Liberty and Court at 4:35pm.


And Here's High and Court, Liberty and State, and Commercial and Court.


The woman who hit him, Rose Litherland, was high on methamphetamine and marijuana when she barreled through the intersection of 17th and Chemeketa. She did not have a valid driver’s license and is legally blind herself. She has been sentenced to nearly six years in prison.

If someone were using a hunting rifle or chainsaw instead of a car in this manner, we'd describe it quite differently, wouldn't we? Whatever this is, it's not "accidental."
Posted by Salem Breakfast on Bikes at 6:00 PM

As John's parish priest, I've been astounded by John's recovery and humbled by his truly merciful attitude toward the woman who struck and nearly killed him. He has shown a truly Christian response to this ghastly situation.

You are spot-on in wondering what our thoughts would be if this crime had been committed with some other weapon. Because most of us also wield such a tool (potentially of death) we tend to find ways to downplay both the danger and the responsibility.

I am glad the court saw the situation for what it was, and chose to make it impossible for this person to hurt anyone else on the streets of Salem for a long time to come.

Keep John in your prayers...and let's keep the memory of this situation alive in our community for a long while to come. It makes an important point.

Then there is Jason Sinks. No drugs, alcohol, and supposedly wasn't behaving wrecklessly. He was just using Mission St. exactly the way it was intended... to move the maximum number of motor vehicles in the shortest possible amount of time. Even though he killed Conner Jordan, he won't face charges of vehicular homocide and he won't be punished under Oregon's vulnerable user law.