BikePortland has a story today on a set of changes coming down from MAP-21, the new federal transportation bill. The changes look on the surface like they could have very significant, even huge, implications for Salem. 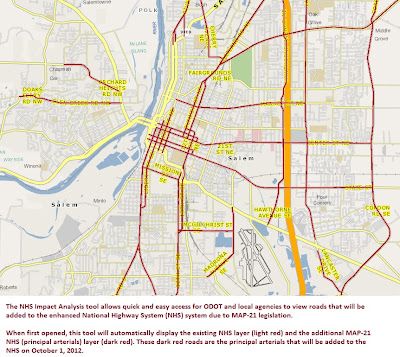 The roads in red are City or County managed roads, all classified as "major arterials," that would become part of the National Highway System in an expansion effective October first.  (ODOT has published a mapping tool for use in analyzing the impacts.  The graphic is from this tool.)

At BikePortland Jonathan Maus writes about changes just as significant for Salem as for Portland:


several of our local streets — including ones that are crucial for bicycling — would suddenly be required to conform with design standards laid out by the Federal Highway Administration, instead of the more flexible local and state standards used today....

if engineers want to make any changes that deviate from FHWA design standards for "principal arterials", they would have to go through a cumbersome process of applying for exceptions....

Or, in the words of a source at ODOT, "this designation basically forces state and local governments to treat arterials like major highways... Speed will increase, certain designs, like bulb outs, won't be allowed without an exception. So on and so on."

You'll notice several downtown streets included in the reclassification, streets that are currently part of the downtown mobility study and are also ones involved in the Salem Downtown Partnership's proposal for greenscape improvements.

If making change in Salem is as difficult as it is, these changes could make them even more complicated and slow.

(Hopefully the City will be able to comment on this tomorrow....stay tuned for more.)
Posted by Salem Breakfast on Bikes at 6:45 PM

At the moment, the City "doesn't see a significant affect on road planning":

"We are aware of this. There is very little information at this point as to whether or how this would impact local roadways that are not under the jurisdiction of ODOT. For ODOT roadways, there are some differences in standards (e.g. vertical clearance must be higher on NHS routes). We will know more (hopefully) when guidelines associated with MAP-21 are published."

This could change when the guidelines are published, but as of now the City doesn't see a significant impact to City roads that might be included in the NHS.

BikePortland has a piece on the latest.

"[O]n Wednesday at the Oregon Active Transportation Summit, ODOT Federal Affairs Advisor Travis Brouwer downplayed the impact. Asked by a panel attendee about how the NHS expansion will impact design guidelines, Brouwer (whose bike route to work is now part of the NHS expansion) said, "It turns out there's a lot of flexibility there." Brouwer said if local agencies like PBOT wanted to implement a design on an NHS road that doesn't jibe with FHWA standards, they could apply for an exception. He said the application process would be seamless and could often be done at the local level without federal oversight."