Parking Task Force Meets Tuesday - And has a Person who Bikes on it!

The Downtown Parking Task Force meets Tuesday, for the first time I believe. 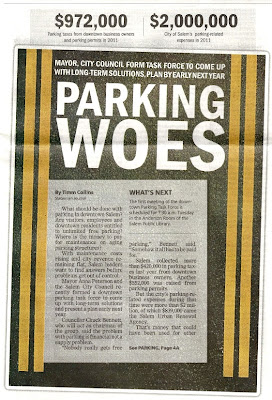 It made the front page, and the discussion was great to see.


What should be done with parking in downtown Salem? Are visitors, employees and downtown residents entitled to unlimited free parking? Where is the money to pay for maintenance on aging parking structures?

Councilor Chuck Bennett, who will act as chairman of the group, said the problem with parking is financial not a supply problem.

“Nobody really gets free parking,” Bennett said. “Somehow it all has to be paid for.”

Salem collected more than $420,000 in parking taxes last year from downtown business owners. Another $552,000 was raised from parking permits.

But the city’s parking-related expenses during that time were more than $2 million, of which $839,000 came the Salem Urban Renewal Agency.

That’s money that could have been used for other downtown projects.

The first step towards a better, more efficient allocation of public space for car storage and other transportation needs is transparency.

As Councilor Bennett says, "nobody really gets free parking." Exactly! Free parking is a costly subsidy for drive-alone trips, and we may decide that that's still important, but it's equally important that we lose the notion that it is somehow magically free. The subsidy is a policy and political choice that has real world consequences not just for downtown merchants but for the viability and character of downtown generally.

One of the members of the Task Force is Tyler Jackson of Salem institution Jackson Jewelers. But he's not just behind the counter.  You might also have seen Tyler racing! For several seasons he has also been the MC for the Buy Local Short Track series at the Fairgrounds.

It's great to see an important downtown business owner who also bikes involved in the task force!
Posted by Salem Breakfast on Bikes at 12:01 PM