It is fashionable to say that there's not enough parking downtown, that we have a parking problem, and that the lack of parking is killing downtown.

This is all backwards.  Rather than focusing on cars, on their storage and movement, we need to focus on people, their housing - the "storage" - and their movement, which sometimes involves cars and sometimes doesn't.


In our downtown, urban renewal is attempting to accommodate customers of the 1970s who need places to park their cars. Salem’s business community of a century before had been built for residents who lived close enough to walk from their homes to shops and professional appointments, or lived in the upper floors of downtown buildings. However, the growth of the city had relocated families into neighborhoods that required automobile transportation. Along the east side of Commercial Street, the half-block south of the Chemeketa Street, already had been torn down for a Lipman & Wolfe (Liberty Plaza) surface parking lot quite a while before the Chemeketa Parkade came onto the scene. [italics added]

At one time there were houses here - it was a thriving residential neighborhood! (You can see part of a presentation on that here.)

Here's the Eugene Breyman house on Summer Street in probably the 60s or 70s.

Here is the site today, the State Lands building.

Whether it's the Pringle Creek Urban Renewal Area with SAIF, the library, and city hall, or the "marble ghetto" of the Capitol Mall, we have too many single-serving office buildings and parking lots, abandoned at 5pm and on weekends, idle nearly 75% of the week.

Unfortunately, the neighborhood wasn't just leveled for buildings. Much of it was leveled for parking. 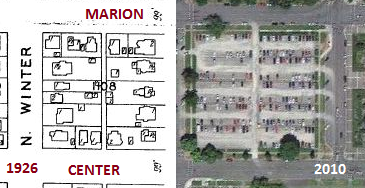 
Look at a satellite map.  There's plenty of parking in downtown Salem.  We devote enormous area to the footprints of surface parking lots, parking structures, and on-street parking.  Though it might be rented for hourly, daily, or monthly car storage (though often it is "free"), this property isn't otherwise generating meaningful commerce - and meaningful value.  Rent for car parking is a paltry and wasteful economic use for land! 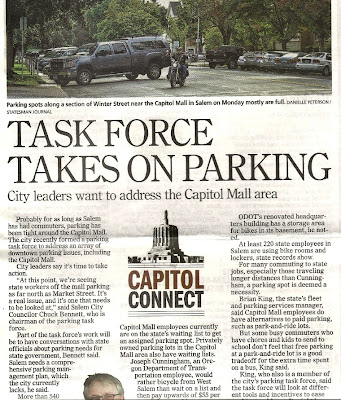 Writing earlier this week about the Downtown Parking Task Force, Michael Rose omits perhaps the most salient fact: A new parking stall costs around $30,000. The State currently has a 500+ person waiting list for parking. Car storage is a huge cost.  A new parking garage for 500 cars would cost about $15,000,000.  (Not to mention the operating costs.)  That's a $15 million problem!

It's great to talk about the price to park for a driver, but what of the capital costs for the Capitol Mall? Is this really the best and highest use for increasingly rare State monies and for land? And what about the fact that now the land has been taken out of circulation and can no longer support other functions - the opportunity cost of devoting the land to car storage?

For $15 million the State could buy 30 years worth of transit passes for 500 people or ebikes for 5000 people. There are lots of solutions that would be more cost effective and better for the City and its citizens.  Solutions that would leave the land free for a higher public use, a public-private use, or even a solely private use, all uses that would generate more value for the public and for individuals.

But parking dazzles us.

If we worried more about how to house and attract people downtown, and less on how to store cars and facilitate the movement of cars, then we'd be focusing on the right set of problems.  And we'd also be able to think more critically about how to generate value on the land we have as individuals or collectively as the public.

Bravo SBOB. The poster child for me is the beautiful old City Hall that was torn down in the early 70s to make a parking lot downtown. We have torn down so many beautiful government and commercial buildings and residences in Salem and replaced them with dreck (cheap new buildings or parking lots). Sad.

Let's not also forget that the city/state found it perfectly acceptable to essentially sell the blind school, and depose the blinds students, for a hospital parking lot as well.