Is it really that much of a mystery? Ostensibly a center for families and children, the Kroc center is located in the middle of an industrial wasteland, rife with trucks and broken glass. 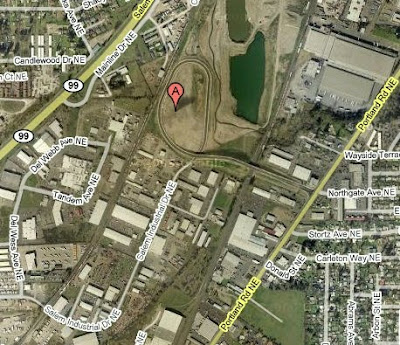 Two railroads, the Parkway, and Portland Road are all formidable barriers. Who's going to send their kids there?  You have to drive them.  Of course you do.

Yet we have to ask why it is not successful?


Three years ago The Salvation Army Ray & Joan Kroc Corps Community Center in Salem opened to much fanfare and great expectations. Thousands of community members, from all walks of life, had banded together to turn a long-shot idea into reality. They raised $10 million, in part because other nonprofits put aside their own fundraising ambitions to focus on the Kroc project....

Civic leaders and residents believed they were getting a broad range of youth-focused programs and activities, not a fitness center that would compete with the private sector. They looked forward to kids being brought to the North Salem building from throughout Marion and Polk counties, with no child ever being turned away because of inability to pay.

Instead, the center seemed to turn inward instead of outward. The Salvation Army and the community clashed over its direction. Key community leaders dropped their association with it. Membership fell nearly in half. Employment had to be cut and a deficit developed. A transportation system for youth never came together; and minimum fees for youth were instituted, although Pontsler wants to increase the number of partial scholarships.[italics added]

It's in a freaking compound, ringed by multiple moats! Of course it turned inward - that's how it was sited and designed! And you shouldn't need a special transportation system for youth.  Ordinary walking, biking, and bus service should suffice.  But the siting is so bad that even pro-walking and biking parents would be foolish not to drive their kids.

How messed up is that?

The Kroc Center probably has multiple challenges, but an important one that is not getting enough play is the structural one caused by its location, the barriers that surround it, and its lack of transportation connections.

The Kroc Center Access Study has a website now. It it mainly looking at the problem of coming from Keizer and crossing the Parkway.  It's not looking at Salem Industrial Drive, at crossing Portland Road, or other parts of the connectivity deficit.  Just getting across the Parkway and RR lines.

Here, for example, is one bridge concept (all of them can be seen on the project document page; the bridge concepts document seems to have the embedding disabled, unfortunately.)

On the Advisory Committee are Robert Fox and Kenji Sugahara.
Posted by Salem Breakfast on Bikes at 7:00 AM

In other news, the SJ today has a letter saying that it's absurd to be discussing a ped/bike bridge from Riverfront Park to Minto because there's no money to build it.

If that's true for a $10M (max) project with overwhelming community support, then I suspect we will soon be reading that the Salem Boondoggle Brigade pushing the $600M auto bridge fantasy has decided to disband, and we can convene an actual transportation planning organization that looks ahead to the actual future we have in store (lots more biking and a whole hell of a lot less driving) instead of fixating on the Highway Departments 1960s fetish for roads. And then Salem will be able to think about how to think about things like Kroc and the Pringle Creek development, both examples of what happens when you design buildings to show off to funders instead of designing around the people who are supposed to use the buildings, which starts with how do they get to and from those places.

We live in North Salem, but still find the Center out-of-reach.

In the past, when I've brought this issue up to Kroc staff or city leaders, I have been told that "new bikes lanes were installed." My reaction: these folks have never actually been on a bike near the center as those pretty, new bike lanes end just a stone's throw from the front door. Then families are left with a narrow road with broken glass, loose gravel, no shoulder, deep side ditches, and large trucks passing by.

Thanks for (once again) saying what I was thinking.

Totally agree. We would love to use the Kroc's newer facilities, but instead we choose to go to the YMCA because we can both bike and walk there with our children.

@Angela, hopefully we'll get through one of these times!

Another consequence of the site being so auto-dependent may be demographic: The center possibly operates as if it were in a suburb, serving parents with time and money to ferry kids around in the car. These parents probably ask for a different suite of services, more like those of a - wait for it - suburban fitness club. A reason the center may have become more biased in favor of fitness club services is likely in part because those using the center asked for them. The Kroc's probably just serving the actual market - you know, customer service! - even if the actual market, because so car-oriented, has strayed significantly from the original and now apparently theoretical target market.

@Lori - Glad to hear the Y works for you! If you see Janice Naimy, Community Wellness Director (photo here), let her know you bike often and encourage the Y to advocate for better bicycling connections downtown in Bike and Walk Salem, the Downtown Mobility Study and in the Salem Downtown Partnership greenscape project. Downtown can be much better for you than it is today!

(@Walker, one mitigating thing about Fairview is that it is being developed slowly rather than all at once. That means built failures will be smaller and course-correction will be easier. The slower timelines also mean that it may go off in directions we aren't anticipating just now. While I am very disappointed in the low standards set for the Simpson Hills development, I am cautiously optimistic that they will not be a fatal flaw for the entire project, and equally cautiously optimistic that a market could develop for greener development and that Simpson Hills will in a later phase come around to meeting that market in a more ambitious fashion. Moreover, I will not be surprised if the other two developers find themselves in unanticipated course correction. If we don't rush Fairview along, the built environment there will arise more organically than plannedly, and this growth may be superior to the growth envisioned in the planning documents, even if it remains guided by them. It's too bad the Kroc wasn't phased and the inappropriateness of the site allowed to become clearer since it wasn't apparently obvious enough at the start.)

Great post SBOB! The Kroc Center was destined to be a crock from day one. This Kroc is an exemplar of the GOP ideology that we don't need tax-funded services like community pools and recreation services for children. All we need is for capitalists to step up and provide seed money for self-supporting enterprises, in this case run by an anti-gay religious cult. This is a flawed idea that deserves to fail. It's too bad that the leaders of our town fell for it.

If you doubt that the Salvation Army is anti-gay, read this:

That there was so much local cooperation with siting it there suggests Salem still has too many people looking to the past of cities rather than the present and future. I suspect only when a new generation comes to the fore here will this really change.

When Cherriots dropped Saturday service, one could hear the last gasp of the Kroc Center’s viability as a practical community-wide servant. Your points about the demographic of actual attenders driving provided services is well-taken. It is the old saw: “Location! Location! Location!” When the center was put out there, it meant isolation and car-dependence. This is not where the tea leaves point for communities people support. I am very sad to see a lot of underground prognostication be confirmed….