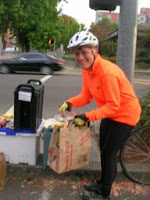 At Breakfast this morning we had an illness, and Jean Brougher helped out with some last minute snacks!

You've almost certainly seen Jean on the road, and she's one of the friendliest people you'll meet.

You may not know that she operates a Bed and Breakfast, the Century House, with a special bike-friendly focus.

If you have friends or family coming to visit, think about the Century House!  (Thanks again, Jean.)

Breakfast also offered a brief window to check in on some of the recent road improvements downtown - and these are real improvements, not "improvements."

A week ago or so, the City opened up another block of State Street to two-way traffic.  At top you can see the new light at Commercial and the changed light at Liberty.  It looks normal, now, doesn't it?  Hopefully most people will quickly wonder why the rest of State Street - heck, why most of the grid - isn't restored to two-way functioning.  (Now we just have to get it down to two lanes instead of three!)

And the fall.  Leaves are turning.  Over at the Upright Cyclist, B+ has promised a series on fall colors!

Finally, in a comment the other day, Curt pointed out that sharrows are being restored on Chemeketa.  Here's one of the new mid-block sharrows!  The density is about twice what they had been before, with four (two each way) sharrows per block face.  I'm happy to see this, even if, as he suggests, they still might not quite meet the recommended placement frequency.  It's a substantial improvement.

Make sure you enjoy the lovely weather this weekend while it lasts...
Posted by Salem Breakfast on Bikes at 1:00 PM