There was one unambiguously terrific development at Council last night: Councilor Thomas revealed she had asked for and received a bike for her birthday on Friday!

But outside of this, good news was sparse, and Council delayed action. 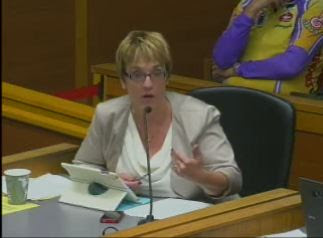 Councilor Dickey offered a motion to ask staff to include skateboarding in the plan and Council voted to continue the hearing with a view towards clarifying rules, roles, and infrastructure for skateboarding.

Councilor Tesler and the Mayor both opposed the delay, saying that so much testimony had been received, the process had gone on so long, that it was unwise to delay further. Mayor Peterson also observed that the plan could be adopted and staff still directed to pursue provisions and clarification for skateboarding. Addressing skateboarding didn't require putting the bike and walk portions on hold.

But sentiment for delay prevailed, and it was not difficult to see the penumbral shadow of the cemetery in the decision to continue to delay.

After Councilor Thomas' news about the new bike, one other element was, if not cheering, at least straightforward and clarifying. A retired veteran finally uttered some of the words that are behind the cemetery problem: "Shopping carts." He didn't want to see shopping carts in the cemetery, just as they were not allowed in Arlington.  It was a classic unsolicited denial that revealed important truth.

Some part of the resistance to a connection between Hoyt and Rural through one or the other of the cemeteries, and part of the fears of vandalism, is a species of "stranger danger." It is not so much that people who walk and bike are feared, but that opening the cemetery, it is feared, will create additional traffic by transients. The fear of hobos, the homeless, and their shopping carts drives a significant part of the resistance to a cemetery connection. Unfortunately this fear is not being faced head-on, but instead is expressed through the code of resistance to walkers and cyclists in the cemetery. (That is not all of the fear, to be sure, but it is a largely unacknowledged component of it.)

Dave Moss recapitulated the claim that the "cloud" on the map would put a cloud of uncertainty on property and property owners. But two owners of houses with backyards abutting the cemetery said that they biked and they welcomed a connection, and said they thought more eyeballs and ears would improve, not harm, cemetery security.

Other testimony helpfully pointed out that infrastructure for people who walk and bike is like lightbulbs and insulation: Cheap transportation efficiency. If 5% of people biked downtown, that's like a free parking garage. The analogy was shrewd.

Replying to Councilor Dickey's questions about bike salmon and enforcement, Salem Police Department noted that so far this year they have issued 57 citations to people on bike, 1 violation, and 8 people have been charged with crimes (or it might be that 8 crimes have been charged). They have also issued 65 warnings.

Thanks for your great continuing coverage of the Salem City Council and shame on the S-J for being MIA. I remember the good old days in this town when we got really good S-J coverage of every Council meeting from start to finish.

I watched the show on TV. I hate to say it, but it might be time to say "uncle" on the Rural - Hoyt "connector" if, as you say, it is the real cause of the continued delay. It really is not that big an issue in the greater scheme of things.

Staff could have had the skateboard policy language from Portland months ago. What a bunch of clowns.