Bike Commuter of the Day

During September's Bike Commute Challenge we'll have an occasional series on bike commuters in Salem! 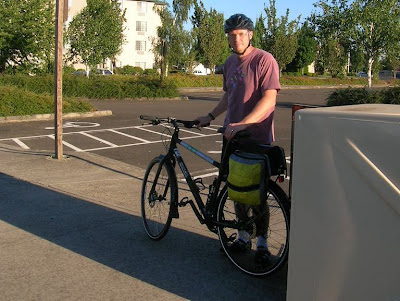 Eric uses one of the new bike lockers installed recently! He has a five mile ride to and from the park-and-ride lot, and then goes in to his job in Wilsonville by motorpool or shuttle. He says he'll commute year-round this way.

He looked like a pretty confident rider, but many of the park-and-ride lots are located on intersections of very busy arterial roads, and they are not designed to attract "interested and concerned" or new riders. In order to become meaningfully attractive connections for the "last mile" leg of a trip, the park-and-ride lots as well as the roads adjacent to them will need improvements for people who bike or are interested in bicycling.
Posted by Salem Breakfast on Bikes at 12:30 PM

Keep up the good riding Eric. Year round is definitely feasible. I used to ride the 3.5 miles each day to the old SMART park and ride at Fred Meyer on Salem Parkway. Then I'd throw my bike on the bus and ride the bus up to Wilsonville.

I only discovered how often year 'round riding was once I took the plunge. There are many, many days in the winter months when a ride is not only feasible, but pleasant and a real pick-me-up!

That's "how feasible" year 'round riding was...