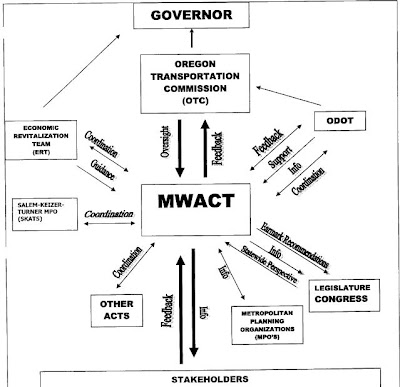 The Mid-Willamette Valley Area Commission on Transportation meets on Thursday, and while pretty wonky, the discussion looks interesting and even important if you're into that sort of thing. The committee prioritizes millions of dollars of funding for road projects, so the discussion is far from merely academic.  (They will meet at 3:30pm, at Mid-Willamette Valley Council of Governments, 100 High St. SE, Suite 200.)

Then folks will talk about the Oregon Transportation Commission's request that the composition of the Area Commissions on Transportation (which advise the OTC - see chart spaghetti!) include representatives from modes other than cars.

On the one hand the Portland Bicycle Transportation Alliance urged the OTC to include bicycling representatives on the ACTs.


Require any new local decision making process to include adequate multi-modal representation. ODOT has been working to improve their stakeholder outreach and engagement process through the ACTs and we ask that they continue by requiring explicit representation in the form of one seat each for public health, bicycling, pedestrian, transit, and land use representatives.

On the other hand, bicycle advocates who were around for the SKATS-BAC era (the Salem-Keizer Area Transportation Study Bicycle Advisory Committee) have suggested that the committee wasn't sufficiently independent and functioned largely to ratify decisions already made by staff. We have seen this over-and-over in the citizen committees charged with advising planning studies: Too often they have neither the information nor the power/authority to act effectively as a counterweight to staff.

MWACT as currently constituted here is heavily weighted in favor of persons advocating for facilities for the drive-alone trip. Just adding one voice for multi-modalism may not generate meaningful change.  It risks being something of a greenwash.

So the prospective change could be more cosmetic than structural.

Also on the agenda is information about pilot studies on a VMT tax for road funding, a tax on actual miles traveled rather than on gas purchased.

Between ODOT's own budget problems and the Federal changes in the new authorization, MAP-21, and onwards, things are changing, and it's an interesting time. But it's not yet clear how much will be just talk and how much will effect real structural change.
Posted by Salem Breakfast on Bikes at 12:01 PM