It was great to see a story in the Statesman feature a bike project proposed in Silverton, but there were also three projects in Salem about which more could be said! 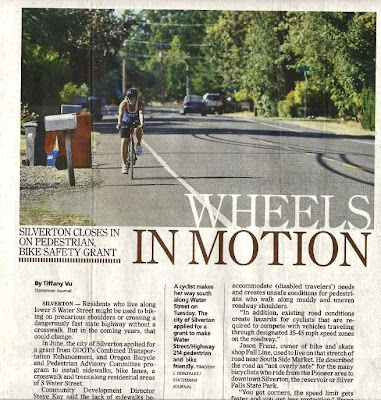 Crucially, two of them didn't make the cut.

It's old news, but the list of projects "not invited" to the second round for the Combined Transportation Enhancement - Bicycle and Pedestrian Projects 2012 Solicitation includes Salem's Orchard Heights and Minto Path projects.

On the list of "invited to apply" for round two, the Brown Road project made the cut!

That's the good news. Still, the Brown Road project is legacy remediation for sidewalks and bike lanes - nothing visionary or transformative.

It's frustrating because Salem could be developing stronger, more visionary projects, but the City does not.  Interestingly, Corvallis has three projects that made the cut. Even Marion County has one project at Hayesville.

This is another reason for Council to take assertive action on Bike and Walk Salem - we're missing out on funding because our projects aren't the strongest!
Posted by Salem Breakfast on Bikes at 12:01 PM

Little in the way of creative infrastructure, but I bet there will be much interest in the proposal out of Portland to get a ballot measure requiring bicycle license plates and fees!

There will be a fuss about licensing, but I wonder how far it will really get. The Portland BTA has a good summary of the case against it and a series of positive proposals that address the problems better.

Licensing didn't work in 1899 or 1901 statewide, and it looks like it didn't work locally in the late 1930s. Modern examples don't seem to have worked either. I hope the energy can be redirected to sensible proposals that will make real progress.