Anyway, this will update as more people drive into buildings.  It may be that this happens far more often than we think.

And a second one: 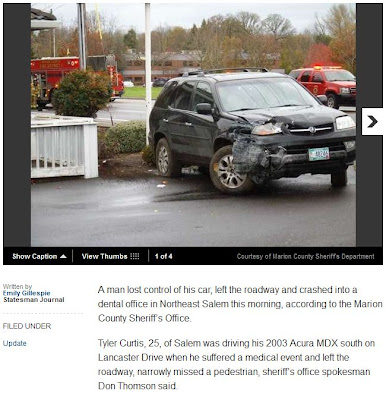 From the later story:


Police, fire and Portland General Electric crews were dispatched to a crash scene Saturday afternoon after a mid-sized U-Haul truck plowed into a storage unit on Silverton Road NE.

Witnesses said that just after 2 p.m. the truck pulled out of a Plaid Pantry parking lot and appeared to accelerate instead of brake as it crossed 47th Avenue NE.

It then hopped a curb and crashed into the storage unit — where power lines connected to the building.

How about a bridge?

March 8th - another bridge and a store! 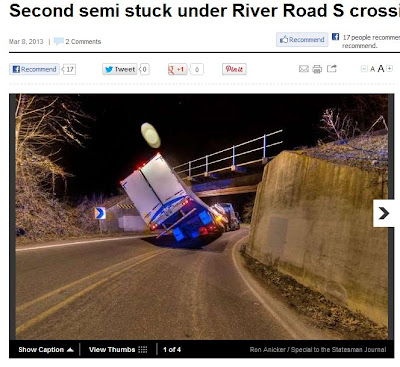 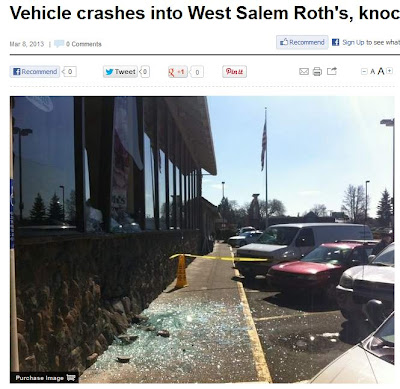 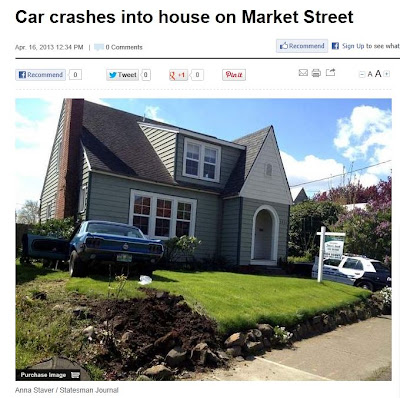 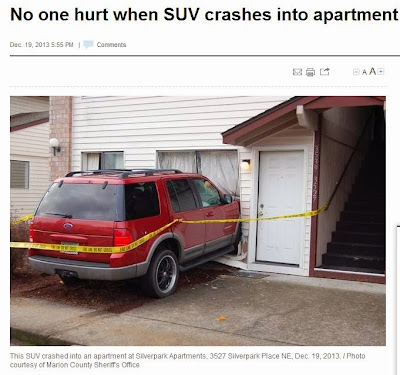 
No one was hurt Thursday when a sport utility vehicle crashed into an apartment in northeast Salem.

The driver...told Marion County sheriff’s deputies she mistook the gas pedal for the brake pedal as she was attempting to park the 2002 Ford Explorer about 12:30 p.m. at the Silverpark Apartments, 3527 Silverpark Place NE. The Explorer jumped the concrete curb barrier and crashed into the living room of an apartment next to the parking space. 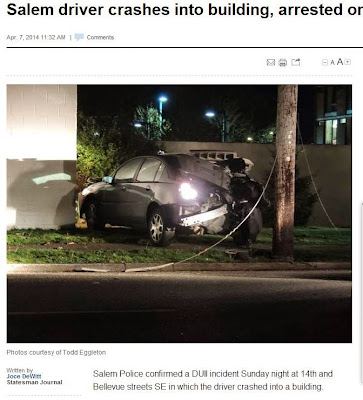 This one's a little scary: 14th Street is a good north-south route for bicycling. About 10pm the driver was going north, crossed the road to the left, and ended up on the west side of the street. She must have been speeding in addition to being alcohol-impaired. Note the SJ language, though! "the driver crashed into a building." It's not the agent-less autonomous car that crashed; it's the driver who crashed! Nice job.

Here's a crash into a home on Center Street. 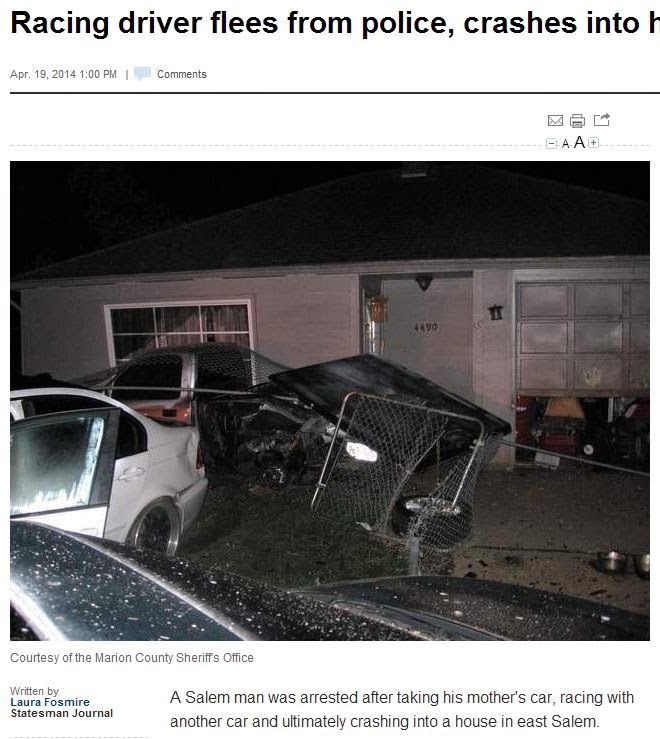 
The tracks are the least of the department's worries, though, since the car that left them also crashed into the front of the building, and into the exterior portion of its museum room, said Deputy Chief Greg Hadley.

The crash occurred around 8:30 p.m. Wednesday, Aug. 13. The vehicle, headed west up the hill on Orchard Heights left the roadway, drove over the island between lanes, through the landscaping and into the building.

This is right across the street from a cluster of schools! And Orchard Heights is pretty wide and zoomy here.

Salem Fire is on scene of a gas leak where a vehicle crashed into a mobile home in SE Salem. #sjnow pic.twitter.com/ySfYDr2xgF
— Joce DeWitt (@Joce_DeWitt) October 6, 2014

Traffic closed in both directions on Mission near 17th as emergency crews work to remove a truck from a creek. #sjnow pic.twitter.com/aUBT4XRsu7
— Anna Reed (@annaereed) December 4, 2014

Here's a good one. Maybe it's a medical issue, but still...

A car drove into the front of the social security admin office at 16th and McGilchrest #SJNow pic.twitter.com/EFvIF7htEy
— Gordon Friedman (@gordonrfriedman) August 20, 2015 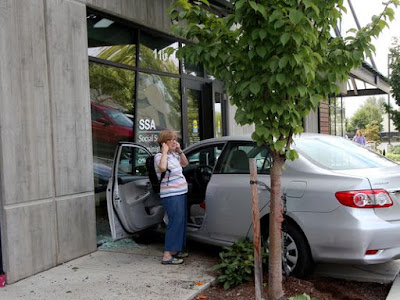 A crew from Wiltse's Towing clears debris from a car that drove into a Great Clips in Salem. #sjnow #greatclips pic.twitter.com/y6lBSk3fJy
— Ashley Smith (@asmithpic) November 3, 2015

Here's a good one!

That's near Summer and Hoyt, apparently. Drivers often seem to take the hills on Hoyt too quickly, so it will not be surprising to learn that speed might have been an issue.

This one's not in Salem, but the image is quite striking. 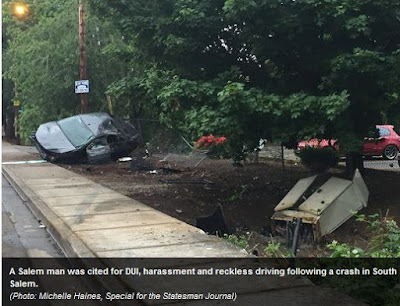 
A Salem man was cited for harassment, DUI and reckless driving after crashing and rolling his car near Commercial Street SE and Wilstey Road SE Sunday evening.

Michelle Haines, of Salem, said she saw Keju pull up alongside her 5-year-old daughter, who was riding her tricycle outside their South Salem home. Haines' husband approached Keju's car and confronted him, according to Salem police.

Haines said as she dialed 911, Keju drove away, doubled back, spotted her on the phone and sped off. A few moments later, she and her husband heard a crash.


The driver, Cindy Rojas Ortega, 22, was cited for driving without a license and her passenger, Johana Gomez Ortega, 27, of Keizer, was issued a traffic citation for providing a vehicle to an unlicensed driver.

Keizer Police Deputy Chief Jeffrey Kuhns said Gomez Ortega was unable to tell Rojas Ortega, who is deaf, how to stop the vehicle. It was Rojas Ortega's first time behind the wheel.

Looks likes somebody tried to drive into Table Five08 on State Street on Friday night.


A Gervais man driving an SUV was killed early Monday morning in Salem after his vehicle left the road and struck a tree, police said.

Police responded to reports of a crash involving a maroon 2006 Chevrolet Trailblazer shortly after 1:30 a.m. near the intersection of Liberty Street SE and Superior Street SE and found Andrew Ramon, 32, dead inside the vehicle.

Update: This was a murder. Apparently after the crash, another man stabbed the driver. 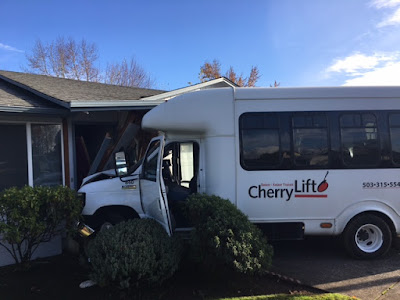 From the Sheriff, the crash happened on


the 4700 block of Fuhrer Avenue NE after a Cherry Lift bus ran into a house. When deputies arrived they found the bus driver was the sole occupant in the vehicle, when he experienced a medical issue causing him to crash. 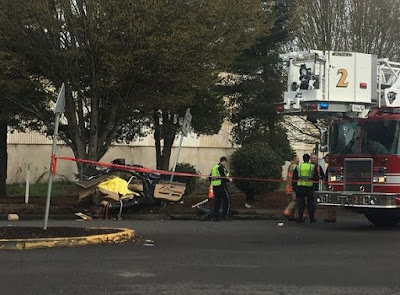 
One man died in a single-vehicle crash on Front Street NE in Salem Sunday morning, according to officials.

The male driver was traveling northbound on Front Street NE around 5 a.m. when he lost control of his vehicle, hit the curb at the corner of Union Street NE before crashing into a nearby tree, said Salem Police Sgt. Jon Hardy.

Posted by Salem Breakfast on Bikes at 3:06 PM

Now, if only we licensed these cars, and made people study for a test and then do some driver training, these things wouldn't happen...oh, wait...we already do that.

From the SJ tonight:

"While testing out his new brakes, a Salem man drove through a stop sign and hit a house in the 3200 block of Sunnyview Drive NE, police said.

At 6:41 p.m. William R. Newman, 36, clipped a corner of the house with his 2006 four-door Cadillac sedan, said Lt. Jim Anglemier, of the Salem Police Department.

Newman told police that a friend had put new brakes on his car and he was testing them out. When the brakes failed he went through the stop sign and into the house across the T-intersection from him, Anglemier said.

Officers received reports that the driver started walking away after the crash, but came back, Anglemier said.

The family living in the house was at home but not in the room where the crash occurred, he said.

Anglemier estimates there’s several thousand dollars in damages to the house.
Newman was issued a citation for disobeying a traffic sign. Anglemier said he didn’t have proof of insurance and was driving on a suspended license."

Couldn't find an account of the crash into 605 Center Street when it was under renovation (now the Center for Hope and Safety), but here's a nice vehicle-meets-concrete example instead:

BikePortland has news of a crash that doesn't seem to have made local news much...

"On March 26th, 2017 at about 3:00 am, a black Ford F150 intentionally crashes into the side of the building of the Star Market at 9005 River Rd NE and steals the ATM. The vehicle is described as a 2004-2006 year and having a leveling kit, running boards, black fender flares and black rims. The rear of the vehicle now has damage from ramming the building, twice."

Geez, our press/cultural approach is messed up. Here's the SJ -

"A truck intentionally rammed into the side of a Brooks market early Sunday morning, and its driver made off with the store's ATM, officials said."

Two separate agents, an intentional truck, and its driver!