Trees in Salem - Crowdsource the Sequoia Class of 1872?

You probably have heard of Waldo Park. It's a dinky little thing with a couple of plaques located at the corner of Union and Summer Street. 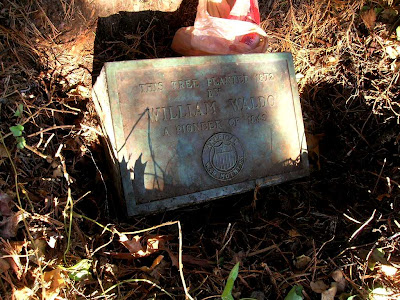 
Waldo Park is named for Judge William Waldo who came to Salem in 1843. Waldo was a lawyer and later became a Marion County Judge. He lived on an estate along Mill Creek in what is now the center of Salem. In 1872, a traveling salesman with a bundle of redwood saplings, convinced Waldo and many other Salemites to purchase the miracle trees.

So where are the other Redwoods of '72? You'd think at least some of them have survived around town, and since houses from 1872 are few and far between, the locations of the trees might say something interesting about Salem history. If nothing else, some of the path of this mysterious salesman might be traced out.

But it's not obvious that someone has asked and documented this question. Cursory research hasn't turned up anything.

One of the problems, at least for me, is pervasive uncertainty about Redwoods and Sequoias. Wikipedia says Sequoia, the City says Redwood, and I'm not sure I can tell them apart. Based on the sizes of other trees of known date, it's hard to believe that the Waldo tree is really from 1872. Other, similar sized trees date from the middle of the 20th century.

The National Park Service and Sequoia Natural History Association have helpful discussions, but I'm still not confident. (Update: It's a Sequoia!)

So here's some notes on some big Redwood/Sequoia trees around town. Do you know anything about them? Maybe we can crowd-source a list and then map of the Redwoods of 1872!

After the Waldo tree, the next best known big trees of this type are surely the Star Trees at Willamette University. They seem to be Sequoias planted in 1942.

Here's another one whose date seems certain. One day I saw the owner of this house on Hoyt Street, and he said he'd planted the tree in the early 1960s. So it's only 50 years old.

Here's one on McGilchrist.
One on 20th.
And one on Breys.
There are ones on Chemeketa and on E street, as well. I hope to take a picture of them on a clear day.

Do you know of any others? Or know anything definite about the ones here? Are any of these really old - and possible candidates for the class of 1872?

While we're on the topic of trees, and thinking about trees that are still with us, some big ones have come down recently. 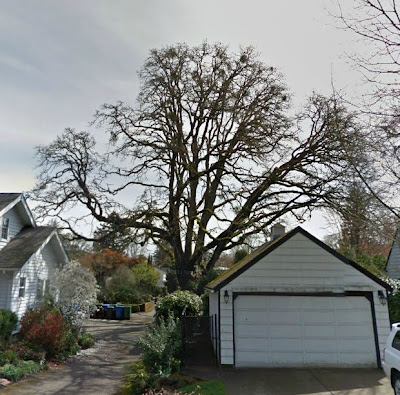 (You can see views of the tree in the Lord and Schryver "home garden" here - the home owners were maintaining a lower profile, but I guess if the tree's in the news, it's not difficult to locate the house and garden.  Anyway, the role of the tree in the creative imagination of Elizabeth Lord and Edith Schryver might be an interesting piece - perhaps someone from the Conservancy will write or already has written about this.)

Elsewhere, I noticed recently that the City cut down two big ones. 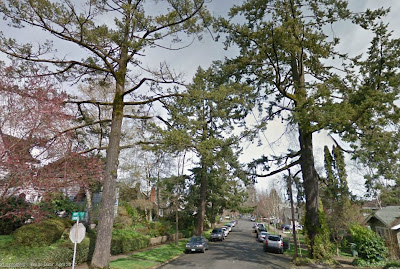 Here's the trunk of the one on the right.

While the oak was diseased, the cross-sections of the fir trunks don't show disease, and you have to wonder why they were cut down. 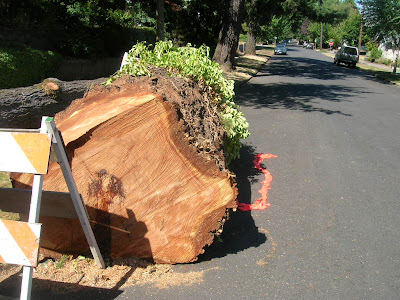 Last spring there were a bunch of comparisons to Corvallis in the news. Corvallis it turns out has a lot more urban tress than Salem. But even more surprising? Gresham has almost the same proportion as Corvallis. 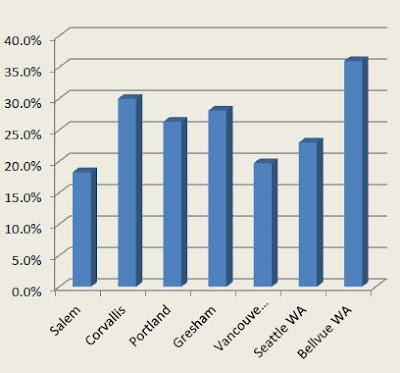 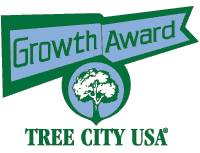 The data and the tree-felling was especially interesting in light of the recent citation of Salem for a "Tree City USA" growth award.

It's a little like with bike rankings - the awards are an Encouragement project rather than an objective description of conditions, the goal being to continue to improve things.

It's easy to be cynical about the shortcomings. But that's beside the point.

Trees are something you notice when you are walking and biking, and not so much when you are in a car.  They help clean the air, water, and soil, provide habitat, and incidentally provide aesthetic delight for us humans.  We should know more about our trees!

A couple weeks back there was a nice story about the two Sequoias on Chemeketa Street. 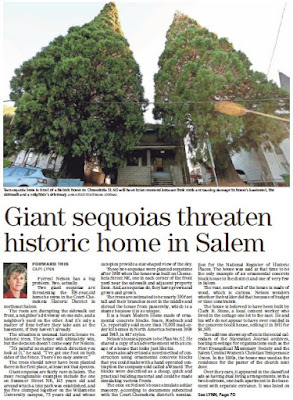 The Sears "Plan No. 52" house, made of pressed concrete to "simulate ashlar masonry," is circa 1908 and the trees date to after that. They're disturbing the sidewalk and basement, and will require formal Historic Review for removal.
Posted by Salem Breakfast on Bikes at 12:01 PM

As far as I know, you can tell them apart by looking at the needles. Giant sequoia needles are typically scalelike and overlapping, resembling a juniper; redwood needles looks very much like hemlock needles, with pairs of short, soft flat needles.

My favorite is the one on Chemeketa just east of 17th. From afar, it has the same shape & hue of the old church steeple beside it!

Thanks for the tree-love blog post! When my sister visited last month from California, she was perplexed & delighted to see a woman on Court Street step out of her car and hug a big old tree.

The visual rhyme of the trees and steeple is great, isn't it!

And thanks for the needle info!

Bonnie Hull has some notes on the tree and its place in the garden.

On the Council agenda for Monday is an item, "RESCINDING THE HERITAGE TREE STATUS" of the oak.

In order to remove a designated "heritage tree," the tree must be "determined to be a hazardous tree by a certified arborist" and Council has to rescind its designation.

The process has been surprisingly detailed and careful:

"3. A tree removal permit application and arborist report was submitted to the City on August 22, 2012 identifying the subject tree as a hazardous tree by a certified arborist.

4. Recently, several large branches, up to 30 inches in diameter, broke off of the tree. While inspecting the damage, a conk (wood-rotting fungus) was discovered growing on a stem. The conk was removed and taken to a pathologist, and identified as Oak Heart Rot (Heterobasidion annosum). The arborist report concludes that the two main stems of the tree have too much decay to support the canopy, and recommends removal of the tree.

5. The Urban Forester has reviewed the findings and concurs with the recommendations of the arborist.

6...the Director of Public Works, under authority granted in SRC 86.140, deemed it in the best interest of public safety to allow an expedited removal of this tree before the Heritage Tree status could be rescinded. Council was made aware of this in an August 31, 2012 email. The tree was removed on September 5th, 2012."

So the Oregon Travel Experience (remember them for the secret retirement story!?) has notes on the Star Trees and Waldo Park tree:

Star Trees - these five giant Sequoias include the tallest of its kind on any college or university campus in the country.

A walk through Willson Park also turned up the Sequoia honoring Oregon Attorney Generals on the east side of the Capitol.

On the walk, a friend much more knowledgeable about trees showed the scales of the Sequoia and needles of several redwoods.

The Waldo tree is very clearly a Sequoia. If it really is 60 years older than the Star trees, it is fascinating how much smaller it is - perhaps confined by the compacted roadbed or something.

Sad news in the paper today. Maynard Drawson died on Thursday the 13th. If anyone knew about these old sequoias, it would have been he. Godspeed!

updated with clip from SJ story on the Sequoias on Chemeketa Street.

A reader in Eugene sends in a note about a massive Sequoia planting project, sponsored by the City of Eugene. They propose to plant over 2000 of them! KVAL had a more recent story about one of the giveaways. Probably a lot of these trees will be planted in unsuitable areas and in a couple generations will need to be removed (if we haven't killed off ourselves, that is).