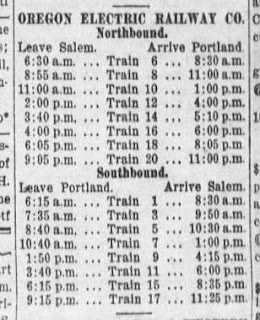 Exactly a century ago, in the summer of 1912 Salem had 8 daily round trips to Portland on the Oregon Electric. The Southern Pacific line had 6 northbound and 10 southbound.

That's 14 total to Portland and 18 total from Portland!

By contrast, in 2012 there are two Cascades and one Coast Starlight per day - 3 total!

Fortunately ODOT is working on that. Via a study sponsored by the Federal Railroad Administration,


ODOT is just beginning a study to improve passenger rail service between the Portland urban area and the Eugene- Springfield urban area. This 125-mile segment in Oregon is part of the Pacific Northwest Rail Corridor that stretches between Eugene, Oregon and Vancouver, B.C. The study will help decide on a general passenger rail route and evaluate options for train frequency, trip time, and improving on-time performance....

We are currently in “scoping” - an early step in the process to identify issues to be addressed. It is an important opportunity for public input.

On Thursday, September 6th, from 5pm to 7pm, there is an Open House in the ODOT Transportation Building, Gail Achterman Conference Room, 355 Capitol St NE, Salem, OR 97301.

The early phase will generate a "purpose and need" statement, followed by an Environmental Impact Statement and preferred alternative.

It is not clear whether this is the high-speed rail project. If not, it could represent a lower-cost solution with more immediate prospects for completion. If it is starting as a consideration of high-speed rail, part of the scoping could be to refocus on conventional rail.  (Rail Now! advocates have argued that ODOT shouldn't wait for high-speed rail to make improvements.)

In any event, rail's going to be in the news right now.  If there's an important negative case against coal shipments, there's a positive case for improved passenger rail service.  It's nice not to be just a nay-sayer!
Posted by Salem Breakfast on Bikes at 7:00 AM