At Breakfast a week and a half ago, construction was just starting on the one-way conversion at Chemeketa and 12th.

Over the weekend, details of the new bulb-out and bike channel were newly poured and visible, and some of them were concerning. 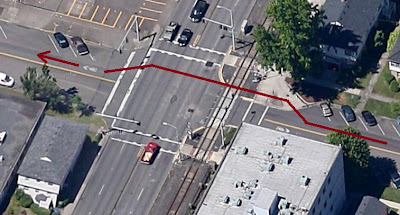 Though I was not able to get a reply from the City, it appears that the plan now is to route people on bike up onto the sidewalk and then back into the traffic lane. Instead of a channel, there are ramps, curb cuts, and ADA bump pads.

Sharrows would no longer guide you through the intersection on a straight line.

Here's the view along the new ramps - straight into the angle parking!

Hopefully the City can confirm and comment on the design change - or verify that there's a mix-up.

In the event the ramps are an intended change, they would represent a small but meaningful degradation of the bikeway. At the Capitol Mall, at the RR tracks, and at 14th, people on bike are forced to swerve and get onto sidewalks with obstacles.  The bikeway should be getting straighter, with bike traffic prioritized, not more meandering!

I'm still trying to get comment and explanation from the City, but here are revised plans that show the revised ramp treatment.

I have a hard time believing this meets design standards for bikeways. The deflection from the lane centerline seems really strange and even unsafe. (The dotted line under "Chemeketa St. NE" shows the road centerline.)  It's a weird and I'm sure non-standard hybrid between crosswalk and traffic lane, and I just don't see it meeting accepted practices. Hopefully there will be more to say.  The plan's primary goal, it should be noted, is to contribute to the rail quiet zone, not to create a better crossing for bike traffic.  But this may make the bike crossing too much an after-thought.

A better process might still have led to the same outcome, but it is disturbing that City staff who have led the Bike and Walk Salem effort, and are most familiar with the design of bicycle facilities, appear not to have been consulted in the design changes.


both Tony Martin, Assistant City Traffic Engineer and I were present and we made the call on the design revision after meaningful discussions with the Union Pacific Railroad and ODOT Rail. Rest assured, City staff makes all of the project decisions that affect project scope, schedule, and budget, such as the one identified at Chemeketa Street. The Project Delivery Group has been working as our consultant project manager to take care of the project coordination issues. WH Pacific [in Bend] was the actual firm that performed the design plans.

This has been a challenging project to date due with respect to meeting the needs of our citizens, the Union Pacific Railroad, ODOT Rail, and ultimately the Federal Railroad Administration.


when the City, the UPRR, and ODOT Rail did a final plans-in-hand field review it was determined that the entire gate structure would require replacement and reconfiguration at a significant cost. In addition, the UPRR was concerned that if the crossing arm remained in place, vehicle drivers might be confused regarding the closure of the crossing to west bound traffic. As a result, it was decided to move the bicyclists slightly to the north, remove the crossing gate, place a flashing light signal at the same location, and construct an uninterrupted closure island between the curb and centerline of Chemeketa. We felt that this change was only a slight revision to the original design concept and was needed to get the Railroad Orders approved.

Taking more time with City Staff who are more familiar with standards for bike facility design, and even outreach to actual users of the intersection, might have led to design solutions that met both the railroad's needs and better met road users' needs. Bond projects as a whole have been coming in under budget, and here was surely a strong candidate for an upgraded facility rather than to continue to try to do it on the cheap. Maybe the more expensive four-Quadrant gate system would have been possible because of budget surpluses.

As Keith noted, project engineers felt that confusion for those in cars was a more pressing problem than confusion for people on bike or on foot.

But the facility is a hybrid, neither fish nor fowl, and asks people on bike to use some new thing that is not in the roadway, is not a crosswalk, and isn't really an MUP. It may exploit in a bad way ambiguities in pedestrian and vehicular movements. Consequently, as Curt suggested in a comment below, it may exacerbate the "urban deer" phenomenon of people on bike acting unpredictably for people in cars, for people on foot, and for other people on bike. If it were integrated into a cycle track or other separated facility for the length of Chemeketa, its context would give it more sense. Here it's just a contextless fragment.

1) How do west-bound people on bikes get a light? What is the detection scheme?
The traffic signals on 12th Street are pre-timed. The signal will cycle through its phases, just like it does today, whether vehicles are present or not. There is no vehicle (or bicycle) detection at any of the signals in this area.

3) When east-west traffic has the light, how to manage potential conflict with people on foot waiting to go south at the crosswalk? It looks to me like there's a conflict zone on the queuing areas on the promenade.
When east-west traffic "has the light" the north-south pedestrians (and bicycles) on the promenade will have a "do not walk" sign. I hope that bicycles and pedestrians will be able to co-exist in that "conflict zone". They seem to do a pretty good job today along the promenade at all of the intersections in the area.

4) When north-south traffic and crosswalk has the light, where do people on bike stop? Where's the stop bar?
The plans show truncated domes and a bike symbol on the ground just prior to the railroad tracks. The bikes will need to stop before the railroad tracks. Do you believe the cyclists do not know where to stop and actually need a stop bar? If you do we could probably add one into the project. Let us know if you believe this is necessary and we can see about adding one.

A stop bar, it seemed to me, might be necessary not to stop people from the tracks, but to keep bikes from stacking up on the promenade. As long as people on foot and on bike are coming to the intersection one at a time there may not be a problem, but as soon as multiple people on foot and on bike arrive, I see obstacles in that mixing zone in red.

In the end, I have real concerns about this, although I am not certain that it is a "lousy" design.  We'll see how it gets used when it is complete.
Posted by Salem Breakfast on Bikes at 7:00 AM

Thanks for explaining this wild confusion! I cannot tell how it will ultimately play out, but your explanation points to a rather confusing solution.

Are the sharrows on Chemeketa disappearing? I thought some were gone (perhaps due to recent paving) further west.

The City has confirmed there was a design change, apparently at the RR's request. Still working on getting more comment on the reason for the change...more to come. The post will be updated later.

I personally will just take the lane!

Anon, there won't be any lane to "take"! The curb extension will go out fully half-way across the road to the centerline, so if you want to attempt to take the lane, you will be going across the yellow line into the oncoming, east-bound lane.

B+: I rode by Chemeketa on High yesterday and it appears they have been replaced. I made a stink about how the spacing does not follow the 2009 MUTCD guidelines. Predictably, engineering doesn't give a shit. But in this case it shows the they are fully capable and willing to make nonsensical, unilateral decisions that compromise cyclists.

This may end up becoming a sort of memorial to Salem's current transportation vision. Clearly, folks who do this sort of thing for a living in Salem are marching to the beat of their own drum. I'm looking forward to seeing the finished product, and then trying to decipher what it means as a simulacrum of Salem's traffic engineering mentality.

The reason that they came up with this is because they city does not want to spend the money for proper RR crossing gates for a two way street. I have a hard time seeing how this treatment is saving us much, if at all. Drivers constantly complain about the unpredictable behavior of cyclists. This is likely to be another example of many throughout the city where this behavior is just engineered into the system from the beginning.

Still waiting on comments from City...it appears they may have subbed out responsibility for the design "refinements" to a contractor and may not have exercised much oversight of the design. We'll know more soon, hopefully.

As I cycle past this, I can't help but think of the phrase "dog's lunch." Thanks for the insights about what is going on here. I take Chemeketa a lot, and thus am particularly interested in it.

updated with comments from City staff

Great comments, and helpful in knowing the planned outcome. While it likely won't be entirely "ideal," I'm certainly willing to give it a chance with this information in hand. The bike signal would be fairly unusual for Salem, wouldn't it?

Ironing out the "conflict zone" may become necessary, but perhaps some time will be needed to make this clear. This will likely increase Chemeketa's appeal as a Bike Boulevard--though I would love to see the rather odd twist-and-shout connection at 14th ironed out.

I'm a bit saddened that the apron at State and 12 by Willamette U. was "fixed" (angled toward the intersection) so that it really makes it harder for cyclists to use the sidewalk as a way through WU to the promenade. I know this isn't ideal in some way, but it is widely used and at least gets the bikes off the road, keeping them from "salmoning" up State.

I don't want to be that typical cranky cyclist who demands everything be some sort of imagined "perfect," so I'm very appreciative of your help in getting the information flowing on this particular story. Anything that makes Chemeketa more effective for bikes is desirable...one sees quite a few on this street these days.