A couple of days ago the League of American Bicyclists announced a new level in the Bicycle Friendly Community program.   Cities that are now rated Platinum will have a Diamond level to chase.   The Portland Bicycle Transportation Alliance and BikePortland weighed in.

The timing of the announcement looks like it prepares the way for the fall round of Bicycle Friendly Community announcements.  Salem's turn for re-certification is in this round, and it will be interesting to see how we fare.

On the one hand, after the Union Street Railroad Bridge and the initial pilot of sharrows on Commercial, Chemeketa, and Rosemount, the City has done nothing substantial.  It's all about legacy remediation: Bikelanes and sidewalks in the context of road expansion.  So you get busier, less comfortable streets, but you do get a bike lane.  Not sure how much of a win that is.  Definitely not a win, many intersections are being widened, and dual turn lanes added.  So in many places things are getting worse for non-auto travel.  Over on facebook, it was observed that "over the last 15 years Salem has gone from 1.7% bike mode share to 1.6%."  The manual bike counts from 2008-2011 (we didn't do them this year) haven't shown city-wide increases, either.

So based on results, for the Engineering and Encouragement side, the City is not doing very well.

But you know, there are some "green shoots."  Style!  This summer there were lots of new kinds of bikes around, a diversity new to Salem. You saw the way Franklin's Bottle Shop welcomed bikes inside.  Upright Cyclist is devoted plain-clothes, everyday utility cycling.

Earlier this summer, there was a a big-box, department store "fixie," a Thruster, locked up at a store on Lancaster, not far from the store that sells it. 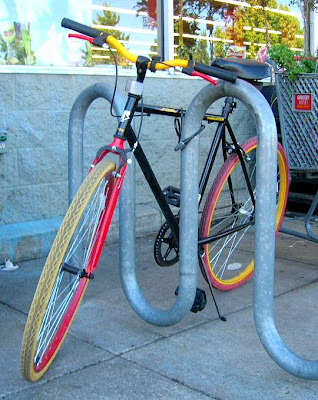 A single-speed on Lancaster! 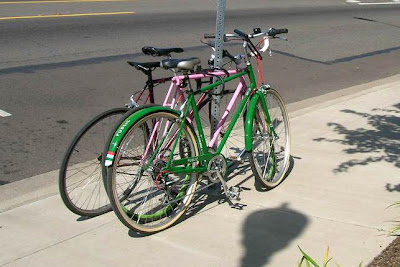 This Public city bike was locked up on Broadway. 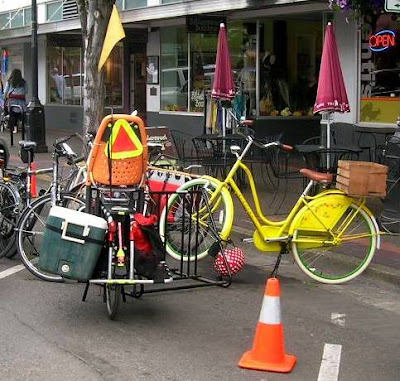 And you've probably seen this great yellow Omafiets and one or more of the xtracycles around town.

It is impossible to imagine all this five years ago on Salem streets!

So even as the City falls behind, there are signs that the tide is turning.   It may be that the change will only come from the bottom up - and hopefully the City and other institutions will figure it out and start to nurture these trends!

With the retirement of Lance, maybe we can finally get away from racing as the dominant industry paradigm.

The 50s weren't great for everything, but I'd love to see more of this:

I feel it too. Three more longtails in our neighborhood. Queuing up at lights with other cyclists. Full bike racks on Court St. They have installed a bunch of new racks at Willamette and they are already full.

Great points about both the plusses and minuses in Salem cycling. I agree that, for now, the changes will largely be bottom-up…and this is probably both realistic and as it should be for the culture here.

Like you, I have been struck by the wide diversity of bi- and tri-cycles around town this summer. Yesterday (while in my car), I saw an e-Trike (my first) on the Promenade, as well as a number of new upright commuter bikes. The investment made in these and other bikes I’m seeing around town make clear a purposeful intent. They don’t look like toys to me, but honest-to-goodness transport. The growth in eBikes being used on the hillier sections of town is another very excellent sign of both creativity and commitment.

Also on the “plus” side, Chemeketa Street seems to be fulfilling its destiny as one of Salem’s few Bike Boulevards. I’ve been pleased to see a wide variety of types of cycles and cyclists on this street at most hours of the day; sometimes in fairly significant numbers. While improvements at points still need to be made, the city has at least made this possible.

As the inner (and flatter) parts of our town’s potential for non-motorized transport becomes clearer, I look for this and other routes to become even more widely used, driving change in various pinch-points and places of conflict with motorized vehicles.

It is going to take determination by those who are willing and able to use the limited infrastructure available to advocate for changes leading to greater multi-modal utility and urban livability here. It probably won’t be fast enough for some, but citizen-led change is usually the best kind. I, too, see hopeful signs sprinkled through the often desolate cycling landscape here in Salem.

Thanks, too, for the kind mention of my little blog. Your provision of a nexus for information and discussion on this and related topics is most appreciated.