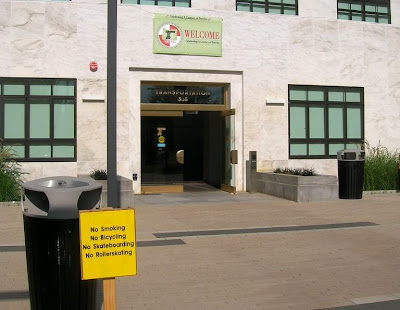 At the Transportation Building open house on Saturday, it was difficult to say how far we've come. The sign out front said, "No Smoking, No Bicycling, No Skateboarding, No Rollerblading Rollerskating."

Is this really what ODOT wants to say about Active Transportation?

Hopefully this was just construction-related, a wish to forbid the sort of "grinding" that is also destructive and even vandalizing. But whether intended or not, it also cast a dismissive shadow on forms of active transportation, implicitly equating them with smoking.

On the mall side of the building, in shadowy lettering you can still read the words "State Highway Department."

Choosing to renovate a building completed in 1951 was a green choice to be sure, but the way it was done also seemed to embody the conservatism of the Highway Department.  Transportation is changing, and the building seemed to take its cues from the recent past, the late 90s or early 00s, rather than really look forward. Though the building clearly needed an update and a seismic retrofit, I was hoping for stronger statements and symbolism about the future of transportation. In so many ways ODOT remains devoted to the primacy of Highway.

Unsurprisingly the building's history parallels the river crossing history. The building, in fact, is a near contemporary of the Marion Street bridge, completed in 1954, which some have argued is similarly in need of an update.
Here's a drawing Scott Bassett found of the "old" river crossing scheme that was eventually chosen - a new bridge at Marion Street, the conversion of each to one-way traffic, and ramp spaghetti at Edgewater and Wallace.

Among the designs not chosen was one for a much larger single bridge at Center, and for Riverside Drive - much like Harbor Drive in Portland, removed in 1974 and converted happily to Waterfront Park.  Still, its function is displaced one block east, to the Front Street by-pass.

The Open House's show-and-tell was on the street side rather than the mall side.  At least as far as the public is concerned, the main and visible part of the remodel was a plaza on Capitol Street, facing the morning sun.

The bike racks aren't too difficult to find, though they are few and pushed to the side.

Some folks suggested that the plans clearly show the 3 racks are placed more than 50 feet from the entry. Whether they meet code may be debatable - there are 6 racks on the mall side that are closer to that entry, but this new plaza does seem to mark the street side entry as the "main" entry.  If so, the rack placement fails to meet the spirit of Salem City Code.

More to the point, why aren't the racks covered and featured, part of a first-class parking installation, front-and-center as part of 21st century mobility choice? ODOT really missed an opportunity here to showcase active transportation.

Stormwater stoked the creative imagination instead.

The bioswales are the first thing you see and encounter on your way through the plaza, and in size and visual impact they dwarf the bike racks.

And indeed, when you got inside to see the posters and press, they featured stormwater, not innovative transportation.

For employees things were a little better.  The glowing elevator pod turns out to be not just a service entry but the bike entry.

The elevator dropped you down into the basement and immediately down the hall is the bike room.

The room may be generous just now, but I sure hope they outgrow it quickly! Did they make plans for expansion?

There's only a couple of staple racks, and it seemed like those with recumbents, long-tails, cargo bikes, or trailers would have difficulty using the wall racks. Not every one can lift a bike, either.  It was a little too much one-size-fits-all.

Here too the facilities were shy of being a showcase, maybe cutting edge for 1995, but not on the vanguard in 2012.

There were three showers and locker facilities adjacent to the bike room. Also in the basement cluster was a mirrored dance or exercise room, already apparently used for yoga.

The offices themselves were tasteful and conservative, mostly done in browns and greys.  The conference rooms were named after State Highway and Oregon Transportation Commission members.

Folks on the tours could see the efforts throughout the building to let more light in. The bronze window frames, too, had been restored and all polished up, ready for a new patina.

The offices and cubes continued the browns and greys- along with occasional centerline yellow accents. The concrete beams were left exposed - covering them would consume precious inches, adding up over the whole of the building.

But then there's this Robins egg blue in the 5th floor lunch room! That was maybe the most surprising element on the tour.  The penthouse views looked out to the Eola Hills.

As for the art, most of the interior art was not yet hung, but the sculpture garden in the plaza was complete. The tables and benches made it look like a pleasant place to eat lunch. The sculpture was mostly abstract and human-scaled, proportioned not to overwhelm the space and its users.

My favorite, though, was a relative miniature by Malia Jensen. Birds!  More than anything else, it humanized the space.

In the end, the remodel was attractive and tasteful, but it was clearly a refresh of a building from 1950. For an agency that desperately needs to reshape itself for the 21st century, it really looked like a missed opportunity. ODOT had a chance for a flagship that expressed real commitment to transportation choice for the future. Instead, it chose the homage to the past.

Here's a tweet on the bike room in action!

yfrog.com/oce2vivrj room for more! in the bike storage room at the @oregondot T building

Funny, it doesn't mention the Fairview facility. But it does show BCC participation rates and Cherriots pass usage.

In case there was doubt about where ODOT ranks bikes and their riders:

"'The fees and taxes they pay to own and operate motor vehicles are to maintain the highway system for motor vehicles and nothing else,' Cooney said in an email to The Oregonian. 'State law requires one percent to go to pedestrian and bicycle facilities. So, motor vehicle owners pay for bike facilities.'"